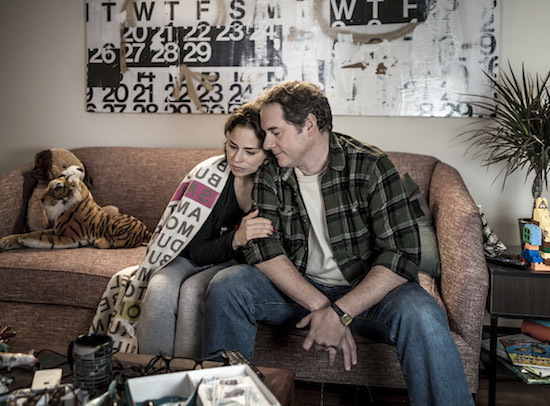 This year's Venice Film Festival (La Biennale di Venezia) shines the spotlight on romance. But it's not about your typical, run of the mill love stories, more like passion with a twist. Whether it is a group's love of mountain climbing, as in Everest, or the devotion child soldiers bestow on their commandant in Beasts of No Nation, or even a futuristic view of attraction as a virus in Equals, love always seems to come at a price here on the Lido.

No film explores that more deeply, and darkly, than Michael Rowe's Early Winter, screening in the Venice Days program. Rowe's lead characters are two functioning people, complete with their own flaws and very human set of mistakes, yet when David (Paul Doucet) and Maya (Suzanne Clément) come together, they bring out the worst in each other, and themselves. Or perhaps that's just how all couples are, once the fairy tale of romance wears off and day to day life sets in...

Discovering the filmmaker behind the work is what I love most about what I do. In person, Rowe is a kind, honest and thoughtful man. In fact, I expected someone different, darker perhaps, more angry. But that's the thing about human beings, we're not just one thing, one personality throughout; we are a blend of many moods, many thoughts and conflicting ideas. It is what makes life, and cinema, so interesting.

I'll preface this by saying that I watched it when I was five but your film reminds me of Scenes from a Marriage, by Ingmar Bergman... That film has always stayed with me, my parents made me watch it.

Your film is terrifying too. Two people who need each other but are so damaging to one another. Who have been your filmmaking influences?

Rowe: Influences in general are Bergman, of course, and Cassavetes, Roy Andersson, Catherine Breillat, there are others but those are my main ones. And in literature Raymond Carver is a big influence.

What is your background?

Rowe: I'm from a small town two hours from Melbourne, in Southern Australia. In filmmaking terms I consider myself Mexican, I don't consider myself Australian. I've lived in Mexico for twenty-two years. Filmmakers like Carlos Reygadas, Amat Escalante, who is a good friend, Fernando Eimbcke, I think we influence each other in our work. And Michel Franco.

How did you direct in French?

Rowe: I do have some notions, I can understand the language, I studied four years of French, years ago. I wrote the dialogue in English and then sat down with the actors and with their help, translated it into French.

Why did you make your female character, Maya so unlikable, she's quite a horrible person. Why not make him that way? 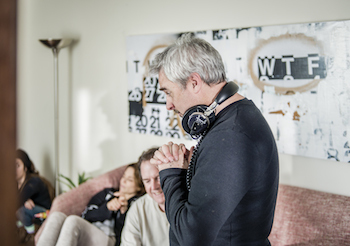 Rowe: Because that's the way she was. I don't think about politics when I'm writing, it comes from somewhere else. And I think that if you have two people in a film, it's about those two people it's not about all women all men. I think we undergo a tyranny in the world of culture, this pseudo sociological analysis and criticism that we're subjected to. Everything has to be able to be analyzed and be politically correct from a Marxists, feminist, socialist POV. No, I mean, people are bad -- men and women -- and people are good -- men and women -- and most of us are good and bad, in different contexts.

It is also about the situation. She's trapped in a way...

Rowe: Yeah, she has a horrible life, she's with this guy who is not the love of her life, and she's got these kids and she lives a long way from home. She does her best, and she doesn't have a particularly easy personality -- it's real life.

Was she difficult to write?

Rowe: All writing is difficult for me. It's the part I hate. Because you are on your own, you're completely in the dark, you're six months away from knowing if it works or not. You can't ask advice of anyone because no one knows. It's a difficult and lonely process. I don't like it but it's the only process that's important. The most creative process by a hundred percent, compared to directing which is also nice, it's much nicer you have people around you. It's much more social, I love it. Writing I suffer through it a lot but want to tell my version of truth. I want to be honest in what I film and I can't be honest if I'm filming something that I didn't write. It's very important to me to really be the creator. I think the heavy creative work is in the writing.

How did you find your two lead actors?

Rowe: I cast Paul [Doucet] and he brought tears to my eyes in the casting, in a scene with no dialogue. He's awesome. I knew he was in. There was another actress attached to the film and she couldn't confirm dates. First of all we had to push the whole shoot by ten months because she was having a baby, and said a month after the birth she would be ready to shoot. We waited and after those ten months when she couldn't confirm dates again I thought, we're not going to use her. I sat down with Paul, we create together, when I film it's just the actors and me, and I said, "who do we have in Canada that could pull off this role?" And Paul said Suzanne Clément and I said, "totally!" as soon as he said it, I thought it would be amazing. I think that sometimes things happen the way they're meant to happen. We had to wait ten months in order to get Suzanne, that's fine. That's what we had to do. I would have waited two years. She's the best possible actress for the role.

How do you feel about cinema as a means to help us understand the world?

Rowe: I believe it should. I like to try to do that in my films. How to understand ourselves, how to understand the world, I think it has that potential and I think that's always what I'm aiming for.

Although you say you're not into being politically correct, what are some themes or subjects you won't touch in your films?

Rowe: I don't like violence and I won't do that kind of a film.

So you won't be making the next Transformers?

You would make a very different Transformers, it would be a bit Kafka-esque.

Rowe: It would be so interesting! If they would give me Transformers I would do something really cool. But yeah, I don't like violence. Sometimes I'd like to do comedy just because I would be so much nicer to myself during the six months of writing. It would have to be a very serious comedy. What I'm interested in is finding out how we can live our lives in the best way possible. Trying to get light moments in there, but I don't think I can do that in a comedy. And I don't know if my natural temper is that way.

The world isn't much of a comedy these days...

Rowe: That's the thing, it's a little heavy and it's not gonna get much better in the next twenty years... It's not a moment for that. Comedies distract you and make life a bit more bearable but I don't like looking away from problems. Comedies don't teach. You laugh and then you go home and the problems are still there.

Is there a film you remember watching as a child?

Rowe: I remember seeing E.T. in a cinema when I was about 11 or 12 and I remember thinking that was the best imaginable possible film ever.

Three words that describe you?

Rowe: What a difficult question! Gentle, I wanna say, and if I reduce it to a single word it will lose -- someone-who-feels-other-people's-pain-very-intensely -- "empathetic" is the actual word but it's not the same thing... And loving.