New NFL recruit Michael Sam opens up about his relationship with boyfriend Vito Cammisano in an intimate new interview with Out magazine -- and, as it turns out, it was anything but love at first sight.

"We didn’t start off as huge fans of each other," Sam tells writer Christopher Glazek in the interview, which took place shortly before he made national history as the first openly gay player to be drafted into the NFL. A member of the University of Missouri's swim team, Cammisano was dressed as a rabbit for a lingerie party, and had become violently ill when Sam first approached him.

Check out one of Richard Phibbs' photos of Sam from the new issue of Out magazine, then scroll down to keep reading: 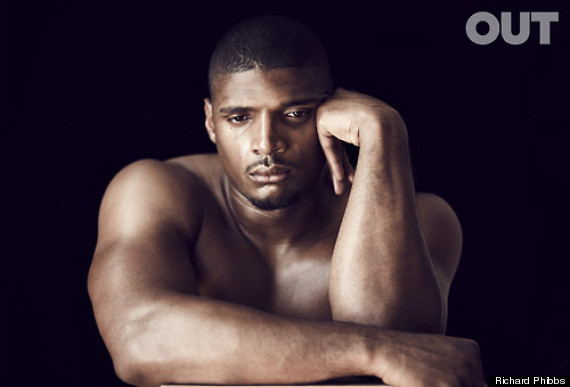 Sam's relationship with Cammisano became the subject of intense media speculation after the couple was snapped sharing a passionate smooch just after the 2013 SEC Co-Defensive Player of the Year learned he'd been drafted by the St. Louis Rams.

In fact, Sam credits Cammisano with helping him become more comfortable being out and proud among his teammates on the Missouri Tigers. He came out during an August 2013 minicamp.

“When I got up there in front of my team, it was actually the first time I said the words to anyone: ‘I am gay,'" he recalled. While he was nervous, his teammates didn't bat an eyelash: “Mizzou is a family. At another school, it might have been a different story.”

You can read the full Out magazine interview with Michael Sam here.

Michael Sam Talks Coming Out, Boyfriend Vito Cammisano In Intimate Out Magazine Interview
Celebrities Who Have Come Out As LGBT