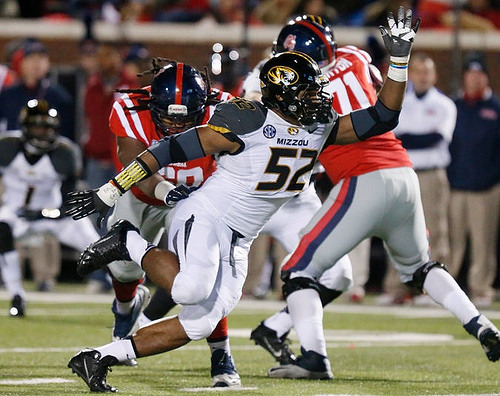 Last week I wrote a post about Michael Sam, the NFL footballer who is making history by being part of a very select group of openly gay athletes. However, after some time to consider this event I have realized there is one thing that was omitted from my post: Michael Sam is a footballer, he is gay, he is a man but he is also African American. While in an ideal, colorblind world, this should be the smallest concern, Mr. Sam's race draws all the more significance to his profound statement.


The forceful reaction to Mr. Sam's coming out illustrates not only the homophobia that is rampant in sport and society at large, but moreover it suggests the level of homophobia that is present in African American communities. Several people have commented already on the number of hateful tweets that came from African American Twitter accounts. As renowned activist Irene Monroe wrote on Huffington Post recently, "black homophobia still has a deadly hold on African American life." Kate Barnhart, who runs New Alternatives, a center for homeless LGBT youth in New York City explains:

White families in New York tend to be more progressive and don't tend to kick out their LGBT youth, we get a couple but not at all [to the same extent]. But some of the Latino and African American families are more likely to, especially for religious reasons. And from the deep South and the Midwest we get a lot of kids.

Michael Sam didn't just come out: he came out as black man in Missouri. The significance of this moment cannot be underestimated. I am not trying to argue that there is any more homophobia in black communities than there is in white communities: homophobia is rampant across the board. But by doing this, Sam has become a very visible black gay man in the South. His action flies in the face of traditional African American conceptions of masculinity enforced by the misogyny of hip-hop and the stereotypes portrayed on TV. As writer Drew-Shane Daniels writes "the truth about "coming out" stories is that black, gay men need to hear them." By his brave act, Michael Sam has become a symbol of change in a community where homophobia is a profound issue.

To an even greater extent Michael Sam demonstrates that the fight for equality must continue to assess the inclusion of the African American community. The enormous economic racial divide in this country is an undisputed fact. Black unemployment rate has consistently been twice as high as the white unemployment rate for 50 years. The household income gap between both communities hasn't narrowed in 50 years. This undoubtedly has a tremendous impact on the black LGBT community: as Kate Barnhart discusses, "some kids are not kicked out because they're gay, some kids are homeless just because their families fall apart because of poverty. And of course African-American folks are more likely to be in poverty." These LGBT young people are much more likely to fall through the cracks of society than their white brothers and sisters: one need only look at the alarming amount of black trans women attacked in New York City in the last year for evidence.

The fight for equality across the country has focused to a large extent on marriage, and undoubtedly this is a huge step. However, this fight has been largely driven by white, affluent gay men who are the most likely to benefit from marriage. As Barnhart suggests, "a lot of the benefits that come with marriage only affect you if you are financially well off. Our young people are not interested in tax breaks because they don't have legal income." Speaking in regards to the murder of gay African American man Mark Carson in New York's West Village, one of the neighborhood's residents pointed out that "there are some people that have been able to take advantage of all the wonderful opportunities that have come along with marriage equality, but a large amount of gay men of color have been left behind." Much was made during the Prop 8 scandal of how much support the legislation received from the African American community. Yet perhaps the problem lies not exclusively within the black community, but, to a greater extent in the LGBT community's failure to properly engage with the African American community and fight for the issues that truly affect them.

Thus the fight for racial equality must go hand in hand with the fight for LGBT equality. By coming out as strong, confident African American man, Michael Sam has become a visible symbol for gay men of color who face even more oppression and discrimination than their white counterparts. He has demonstrated that homophobia is clearly a problem that needs to be addressed in the African American community. He has also drawn attention to the necessity for the march to equality to include its African-American brethren who are so disenfranchised by society.

In recent Huffington Post blog article, Alvin McEwan wrote: "LGBTs of color like myself don't want validation by past events. We want to see who is doing what now. We want to see ourselves in issues of relevancy in today's environment and discussions regarding equality. And we want to see those who resemble us in both racial make-up and sexual orientation have a larger voice in both communities when it comes to these issues." By coming out as a proud gay athlete of color, Michael Sam has become just such a voice.