After two baby showers, Michal Chesal owned a ton of baby gear and felt fully prepared for the birth of her first baby. But then something happened that she wasn't prepared for: Her baby, Coby, was born in December 1999 with Down syndrome. Immediately after Coby's birth, Chesal entered into a whirlwind of therapies, classes and adjustments. But when the therapist told her that her baby carrier wasn't good for Coby because of his low muscle tone, it was the final straw. "I thought, 'Great, one more thing I can't do,'" Chesal said. "But that's when I started to get creative."

Experimenting with products, Chesal put two slings together to create a baby carrier that provided Coby with the support he needed. People constantly asked Chesal, who worked as a director of academic affairs for a university based in Israel, where she got the unique carrier. But she didn't seriously consider starting a business until her friends, Isaac and Aviva Wernick, borrowed the carrier after their baby's open heart surgery and encouraged her to bring her creation to market.

Now in business with Isaac, Chesal sells about $1 million worth of the Baby K'tan internationally each year through roughly 700 specialty shops and chains including Buy Buy Baby and Bed Bath & Beyond. She has even tapped that must-have market for baby businesses: celebrity parents, including Patrick Dempsey and Jenna Fischer. But Chesal's biggest accomplishment has been to provide not only physical comfort and support for babies through Baby K'tan, but also comfort and support for her own children, Coby, now 12, Noa, 9, and Ally, 7, as a single mother.

How did you find out your son had Down syndrome?

We suspected it when he was born, but tests confirmed it when he was two weeks old. He had low muscle tone, so even though looking back, it was so obvious, I was young, and this was my first kid. I had no idea that newborns' arms don't typically flop around. Those first two weeks, waiting for the test results, were a whirlwind. And when I got the news, it was like being hit on the head with a baseball bat. It was just out of left field, the last thing I expected. It was definitely a huge shocker.

My whole life was upside down. I had to adapt and use things in different ways, to rethink everything. It was a process with new baby products, new baby classes, infant massage -- everything I planned on doing I had to do a little differently.

How did you realize the baby carrier you had wouldn't work for Coby?

I put him in this baby carrier I got because I wanted to carry him the way everyone was carrying their babies. But the physical therapist told me the traditional front pack carrier wasn't appropriate for his development because he could have hip dysplasia. He has different issues. With low muscle tone, he needs more support.

How did you get the idea to put two baby slings together?

Just by sort of playing around. With a carrier, he hung loose and his arms and legs were free. With a sling, he was swaddled and held closely to me, but one sling on one shoulder didn't offer enough support, because he could lean forward. The only other option was a wrap, but there's a big learning curve with the wrap, and I was already overwhelmed with everything else. I was trying to brainstorm, so I made a sling out of the same cotton material as a wrap, and then did a second one and slung it over my other shoulder. He was snuggled up and sat in it like a pouch, completely swaddled, and I didn't have to wrap anything or tie anything. He had support from both sides, and I showed it to the physical therapist and she said, "That works. You can carry him in that."

So you were just using it to solve a personal need, but people noticed you were using something different than what was on the market?

I had no intention of doing more with it than just using it myself. But I got comments every day I used it. People would say, "Is that a wrap, a sling, what is it?" I was surprised at how many comments I got. But starting a business was the furthest thing from my mind. I had second child and then a third, and I used it for them, too. It worked great for every newborn. And the comments continued, so as time went on, I realized I had something really good here.

What role did the Wernicks play in helping you finally start a business?

Their third child had a rare heart defect and had open heart surgery a few days after he was born. He's doing great now, but at the time, it was very scary. When they got home with him, I brought over the carrier. He needed something where he was swaddled and secure, but couldn't just be hanging loose or leaning forward, because he was fragile. When they started to use it, they again started getting comments from family, friends, strangers on the street, walking up and saying "that's really cool." They were like, "This is crazy, everyone makes comments about it," and I said, " yeah, I've been hearing it for five years." And they said, "We should make it." We started doing it part time in 2005 and in 2007, went full force doing this full time.

How did you manage to start a business while raising three children as a single mom?

It just happens. It's hard, it takes a lot of work, but if you sort of pretend in your head you don't have a choice, you just do it. I had three kids, but we decided, if we don't do this, we're always going to regret that we didn't try.

Did your business experience any big breakthroughs?

No, it was a slow process. Nothing happened overnight. It grew a little faster than we anticipated only because of -- and I know this sounds cliche -- word of mouth. It was organic marketing, moms using it and telling others moms about it or giving it as a gift. It was from the ground up, because we didn't have a marketing budget. We decided if we were going to invest, we should put our money into having a presence at the main industry trade shows. We built relationships with retailers and built slowly -- we took baby steps. The more stores we got in, the more moms wore us, and the more moms wore us, the more stores wanted to carry us. It was like a chicken and the egg thing.

How did celebrities start using your product?

That was also completely organic. We didn't spend money to be part of a gift basket or attend celebrity events because we didn't have the budget. So luckily, a lot of it happened independently -- celebrities would randomly buy it at the store. The first celebrity who ever wore it, in our first year, was Sara Gilbert. She read about us on a blog, tried it and loved it and called our customer service line to buy another one.

Do you hear from any moms about how this has helped their babies?

Tons. Baby K'tan is written up in a lot of Down syndrome community boards, and we get hundreds of emails from moms who have babies with special needs. At a trade show just last month, a retailer came to our booth and said she had opened a new baby store and wanted to carry our line. She had actually used Baby K'tan with her son, who had a brittle bone disease, and she said he was in casts all the time and it was easier to get him in and out of the Baby K'tan. It worked for her, and it was interesting to see that this can be used in a lot of different ways to help a lot of babies. We also donate a portion of every carrier we sell to the American Heart Association and the National Down Syndrome Society.

Now that Coby is 12, do you tell him that he's the reason this whole business exists?

Oh yeah. He and his sisters grew up knowing this is their mom's business, this is part of their lives. And he even says, "You wore me in Baby K'tan," and he talks about working here when he's older. So it's like full circle. When he's older, I won't be worried about him finding a job, because he can be working in my company.

So even though this was tough, it has all worked together to help you be a better mother and business owner?

It's wonderful to have something you feel good about, with something meaningful behind it. What better way to earn a living for your kids than with something you started yourself because of your children? It's interesting the way everything turned around. 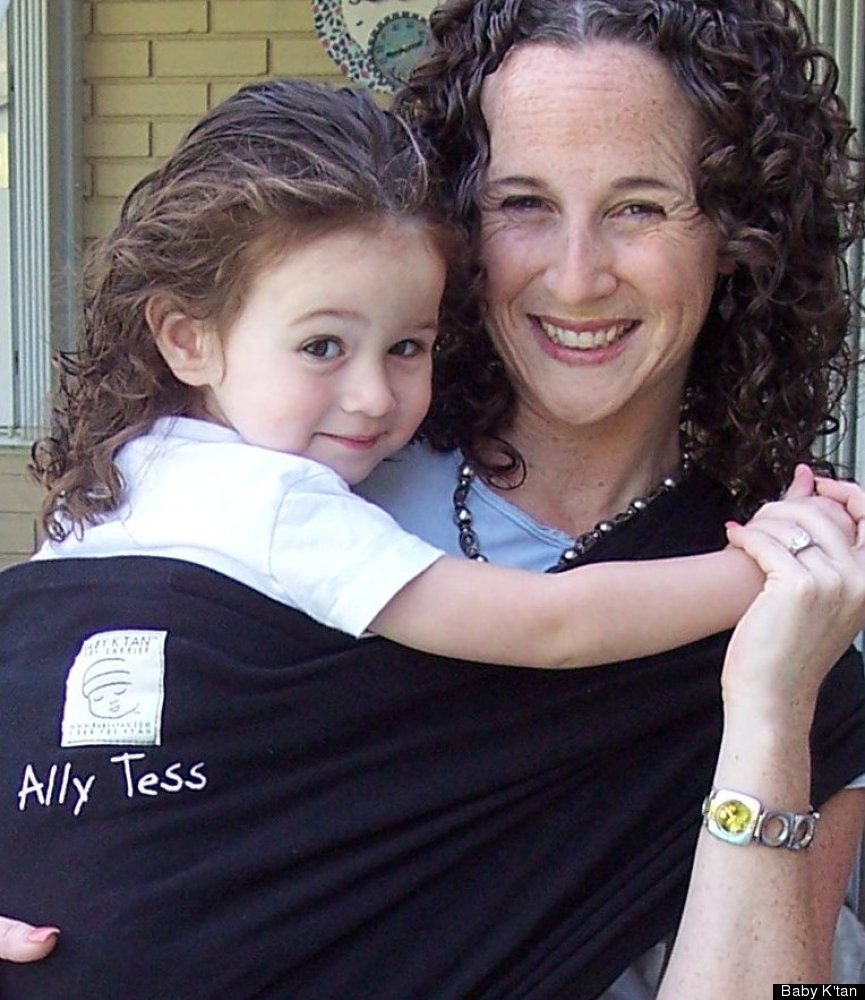 1 / 15
Baby Boom
Chesal with youngest daughter, Ally, in the Baby K'tan. "What better way to earn a living for your kids," Chesal said, "than with something you started yourself because of your children?"
Baby K'tan