"I think my automatic reaction would be, even though I'm a small woman, I'd want to go find that guy and beat him to a pulp," Bachmann said on NBC's "Meet The Press" Sunday.

The Minnesota congresswoman said she looks at the "horrific" incident through the lens of a mother. "I think that's what any parent would want to do when they think about their child," she explained about her impulse toward violence.

Bachmann said she has no doubt justice will be done now that the Penn State scandal has garnered so much national media attention.

On Friday, President Barack Obama said that the Penn State scandal should lead Americans to do some "soul-searching."

"Obviously what happened was heartbreaking, especially for the victims, the young people who got affected by these alleged assaults," he told Westwood One Radio in an interview Friday night.

"And I think it's a good time for the entire country to do some soul-searching -- not just Penn State. People care about sports, it's important to us, but our No. 1 priority has to be protecting our kids. And every institution has to examine how they operate, and every individual has to take responsibility for making sure that our kids are protected." 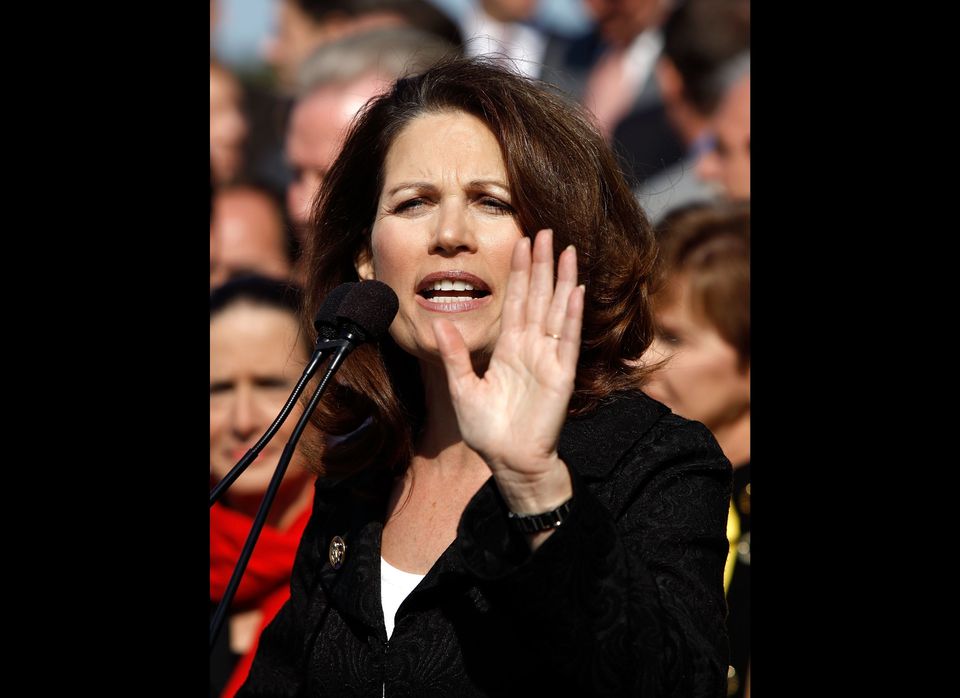 1 / 13
More Culture Warrior Than Legislator?
In Matt Taibbi's <a href="http://www.rollingstone.com/politics/news/michele-bachmanns-holy-war-20110622" target="_hplink"><em>Rolling Stone</em> profile of Bachmann</a>, he claims that Bachmann's efforts to portray herself as a righteous and religious culture warrior prompt additional questions and skepticism: Bachmann's story, to hear her tell it, is about a suburban homemaker who is chosen by God to become a politician who will restore faith and family values to public life and do battle with secular humanism. But by the time you've finished reviewing her record of lies and embellishments and contradictions, you'll have no idea if she actually believes in her own divine inspiration, or whether it's a big con job. Or maybe both are true -- in which case this hard-charging challenger for the GOP nomination is a rare breed of political psychopath, equal parts crazed Divine Wind kamikaze-for-Jesus and calculating, six-faced Machiavellian prevaricator. Whatever she is, she's no joke. Despite skepticism and opposition from some, however, Bachmann's particular blend of conservatism has undoubtedly propelled her to the top tier of the GOP, at least in the public eye. Her legislative record, both <a href="http://minnesota.publicradio.org/display/web/2011/08/10/michele-bachmann-bio/" target="_hplink">as a state representative</a> and a congresswoman, however, has been less impressive. Bachmann's legislative deficiencies most recently arose when then-Republican presidential candidate and former Minnesota Governor Tim Pawlenty claimed that his rival's legacy amounted to "giving speeches and offering failed amendments," and that her "record of accomplishment in Congress is nonexistent." Politifact <a href="http://www.politifact.com/truth-o-meter/statements/2011/jul/28/tim-pawlenty/tim-pawlenty-said-michele-bachmanns-legislative-re/" target="_hplink">deemed</a> this charge to be "Mostly True," hanging their judgment in part on a Politico <a href="http://www.politico.com/news/stories/0611/57885.html" target="_hplink">piece</a> that summarized her meager accomplishments as such: Now in her third House term, Bachmann has never had a bill or resolution she's sponsored signed into law, and she's never wielded a committee gavel, either at the full or subcommittee level. Bachmann's amendments and bills have rarely been considered by any committee, even with the House under GOP control. In a chamber that rewards substantive policy work and insider maneuvering, Bachmann has shunned the inside game, choosing to be more of a bomb thrower than a legislator.
Getty