Former Congresswoman Michele Bachmann (R-MN) has broken her silence on the matter and endorsed someone for the 2016 Republican presidential nomination -- former President Ronald Reagan. 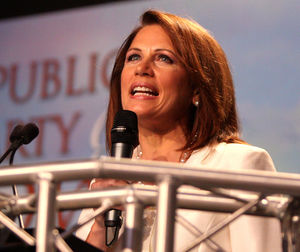 "My good friend and fellow MENSA member Sarah Palin is right about one thing," Bachmann said at the outset, "eight years of a liberal, Sharia-loving communist that has a mostly 1980's-era Republican view on things related to the use of military force and the economy, have left this country reeling, and we need a return to what made us great." Bachmann said, however, that she disagreed with Palin's assertion that Donald J. Trump was the man for the job and said instead insisted "another B-grade talent" should get the job.

Claiming that no one else "alive or dead" could do "as good at presidentification" as they'd need to, Bachmann said she was announcing her support for Reagan in the primaries. "Sure, he's dead, and sure he hasn't been in any of the debates," Bachmann conceded, "but if anyone can overcome the bounds of electoral law and mortality, it's Ronald Reagan! We need his great wisdom trickling down upon our heads now more than ever!"

"Let me just get this out of the way too," Bachmann told those assembled at a prayer breakfast held at a church not far from her home in Minnesota, "yes, the Constitution says that you can't serve more than two consecutive terms in the White House. But it doesn't say anything about ghosts or zombies having a third term, and I'm pretty sure since he's been dead for almost twelve years, and out of office for over 25 years, that the consecutive part doesn't count either."

After the prayer breakfast, a handful of reporters in attendance assailed Bachmann with questions. When asked why she was making this endorsement now, Bachmann said that Palin was her "divine perspiration" and that she couldn't "let Sarah hog all that spotlight." Ms. Bachmann said that she had been "doing a lot of cognificiation" on the subject and had decided that Palin "can't be the only voice of the vapid woman in the Republican Party" and decided to make her own endorsement of Reagan.

"I don't care if he's a ghost or zombie," Bachmann told one reporter, "he's going to be more respectful of the Constitution that Obummer was, I can promise you that!" She also revealed that since she'd resigned from congress that she was "especially bored around the house" because her husband Marcus has been "spending a lot more time working on his tennis wrist" these days and she is "bored to tears" most days. Hence why she is endorsing Reagan, as a means to "get out of the house for some fresh air."

Spokespeople for the Republican National Committee could not be reached at the time of publication. Currently, no rules either for or against zombies or ghosts running for president could be found in the Constitution.