WASHINGTON -- A star has been born.

Former Rep. Michele Bachmann (R-Minn.) on Tuesday starred in a cameo for "Sharknado 3," the cult-classic fantasy movie series featuring vicious, airborne sharks riding deadly tornadoes from the sea. The 2012 Republican presidential candidate was spotted with a film crew outside the White House, presumably before the disaster hits Washington, D.C.

"I believe they are growing in size. Congress has to take this seriously because sharknado is a real phenomenon," Bachmann said in a scene, before excusing herself for a vote on the Hill a couple of miles away.

After several takes, which were filmed among a gathering of tourists on 1600 Pennsylvania Ave., Bachmann's first -- though we certainly hope not last -- movie role came to an end.

"That is a picture wrap on Michele Bachmann!" the director yelled, as a few cheers went up in the crowd.

A woman who was watching the scene nearby turned to a friend and whispered, "Who is that?"

"I don't know. I think it's someone playing a congresswoman," the friend responded. 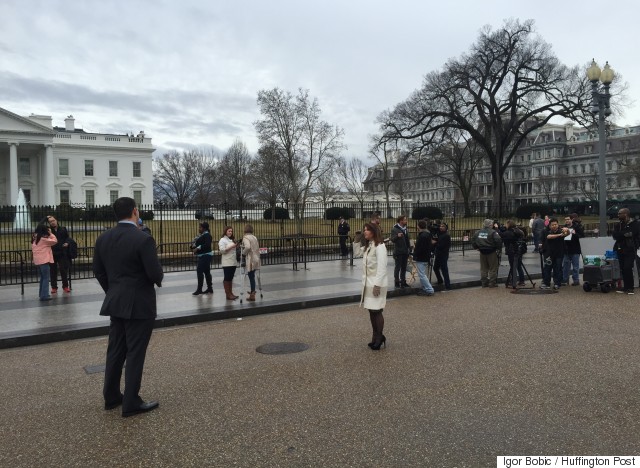 In a behind-the-scenes interview with the film's cast following the shoot, Bachmann explained her role and why she decided to sign onto the film.

"It wasn't anything offensive. It was just fun," she said of the movie. "This was a total stretch for me!"

"Sharknado 3," which the director called "the Gandhi of sharknados," brings back regulars Tara Reid and Ian Ziering, along with Dallas Mavericks owner Mark Cuban as the president of the United States and conservative radio host Ann Coulter as his vice president.