The Fashion Whip is a political style column by Lauren Rothman and Christina Wilkie. Rothman is the founder of Styleauteur.

During the past few months, Bachmann's handlers have zeroed in on a look that seems to appeal to a wide swath of Republican voters. The Iowa Straw Poll winner's appearance is carefully crafted with soft color palettes, a great blow-out, and enough flawless makeup to ensure she's camera-ready at all times. Or so it seems. According to a recent New Yorker profile, one of the rules for news photographers who travel with Bachmann is that they never photograph her in casual clothing.

But all these calculations leave one big unanswered question: How is it that a public figure receiving this much strategic advice still wears such unflattering shoes?

Put simply, Bachmann's choice of footwear repeatedly violates the most basic rules of fashion and upends her personal style, which has been marked by dressy separates, form-fitting shapes and demure necklines. But from the ankle down, Bachmann likes to show a little skin -- many of her shoes are either sandals (often worn with pantyhose -- argh) or peep toed orthopedic-looking stacked heels. Neither option does her any justice, and both are decidedly dated. The day of the chunky, strappy sandal has passed, especially worn with stockings.

Comfort is key on the campaign trail, but heels are not a necessity (just ask Michelle Obama), and wearing a casual shoe with a dressy outfit still looks silly. And like some celebrities, Bachmann also likely changes her shoes as soon as the cameras stop rolling, so the argument that proper heels are too uncomfortable carries little weight in her case.

More important, Bachmann's shoes clash with her clothes. Forgive us if this sounds harsh, but a female candidate cannot convey Commander-In-Chief readiness in backless sandals paired with an evening suit, just as a male candidate wouldn't score points wearing a suit and tie with mandals.

In 2006, Bachmann told the Minneapolis Star-Tribune that her style was inspired by Jackie Kennedy and Audrey Hepburn. Neither of these fashion icons was photographed in stacked-heel open-toed sandals with pantyhose.

To be fair, Bachmann is on trend with both American and British royalty: She recycles her threads for more than a few photo-ops. But as the 2012 GOP candidates each work diligently to create a signature style, it's a shame that Bachmann creates seemingly needless contradictions in hers.

Women's shoes still speak volumes in the political arena, whether or not we like to admit it. In 2005, then-Secretary of State Condoleezza Rice conveyed U.S. power in knee high boots at a time when America was facing a global PR crisis. More recently, Sarah Palin traipsed from Wasilla to Washington punditry on glamorous stiletto heels, while Michelle Obama encouraged women to feel dressed-up in a pair of pointy flats. The perpetually stylish Jill Biden show how to elongate one's legs with her daring, nude stiletto heels.

One wonders whether Bachmann's schlubby shoes are merely her latest political calculation -- a two-and-a-half-inch signifier of the everyday mom turned national candidate. Perhaps Bachmann's jumbled look conveys the aura of a person who can dress for success after more than a decade in elected office, yet is not so pointy-toed as to have stepped beyond her Minnesota roots. Perhaps there are no accidental choices.

But subtle signals about a candidate's true nature often peek out in unexpected places. And as long as Bachmann continues wearing high street fashion with Main Street shoes, her metamorphosis into a fully polished campaign contender will appear incomplete.

For the time being, this may be precisely what Bachmann wants. 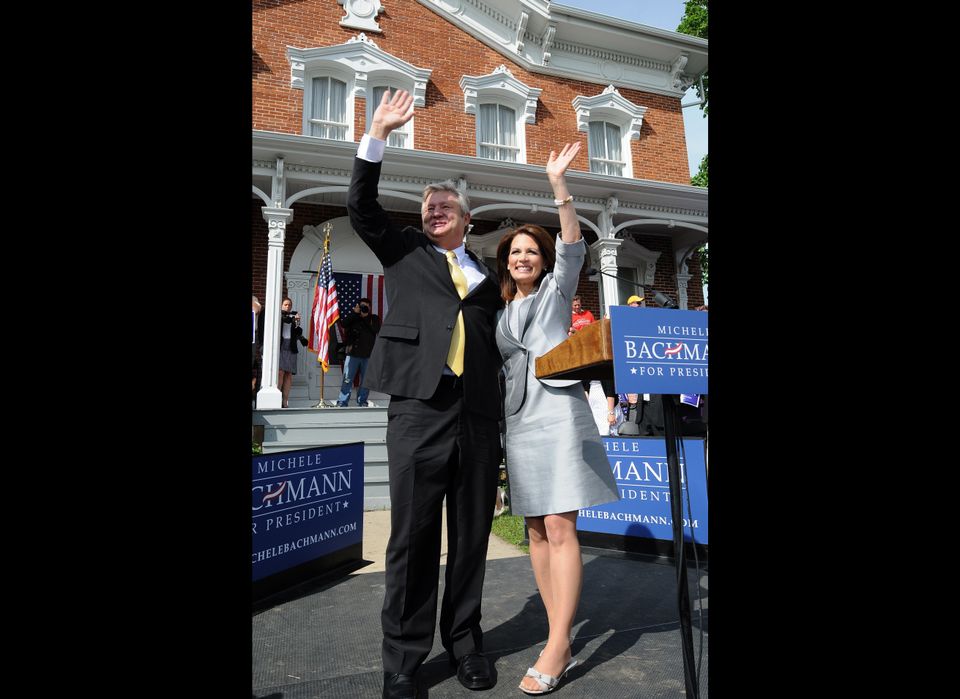 1 / 7
Bachmann's Backless Sandals
Michele Bachmann announces her candidacy for President of the United States in an elegant gray suit and a pair of open-toed, backless sandals worn with pantyhose.
Getty Images