"How many of you know someone who has been killed in gang violence?" Denver teacher and self-awareness coach Ra Maat asks an auditorium half-filled with Manual High Schoolers. Most raise their hand.

"How many of you have heard gun shots in your neighborhood in the last 30 days?" and the room is again a sea of raised hands.

A special visit from Michelle Alexander, professor and author of The New Jim Crow: Mass Incarceration in the Age of Colorblindness and Dr. Vincent Harding--a friend and colleague of Dr. Martin Luther King, Jr.--to Denver's Manual High School presented students with a unique opportunity to ask questions and interact with the speakers on tough topics like social inequality, educational inequality, moral strength and perseverance.

During the Q&A, Alexander confided to the auditorium:

My teenage years were not my favorite years. My father was in and out of jobs, we were being evicted from our home and as a result we moved around a lot. I used and experimented with drugs, and hung out with some folks I probably shouldn't have, but I am so grateful for not having been branded a felon--even though that cause of action might very well have been justified. Instead I got to go to college and follow my dreams, but things would have been very different if I had been swept under the system. What I want, is for young people to get the same love and support that I got, instead of the punitive treatment and shame I see students being treated with in zero tolerance environments.

Alexander's book is a social commentary about the disturbing links between mass incarceration and what she argues as today's "colorblind" racism. Her main proof that the link exists is in the 1982-launched War on Drugs which, she argues, has been almost exclusively waged in poor minority neighborhoods targeting users of drugs rather than sellers.

"We had chosen to abandon the war on poverty and pursue a war on drugs," Alexander said. "More African Americans are under correctional control today--in prison or in jail, on probation or parole--than were enslaved in 1850, a decade before the Civil War began."

She argued that our current system of mass incarceration presents an overwhelming loss to society, in large part because it stresses existing disadvantages: in at least 47 states felons cannot vote, and a disproportionate number of those felons are black men.

Manual High School was forced to close down in 2006, citing under-performance. This year the school is celebrating its first graduating class since it reopened and proudly displays students' college acceptance letters on the front bulletin.

When a student asked if it was necessary to reject street culture in order to stay focused on success, Alexander and Dr. Harding both answered that not everything about that culture is bad.

"There's nothing wrong with wanting to feel part of something, but there's a big 'but' here because if those people you are embracing are destructive forces in your community, that's not good," Alexander said.

"Don't reject the culture of the streets, but let's remake them," Dr. Harding said. 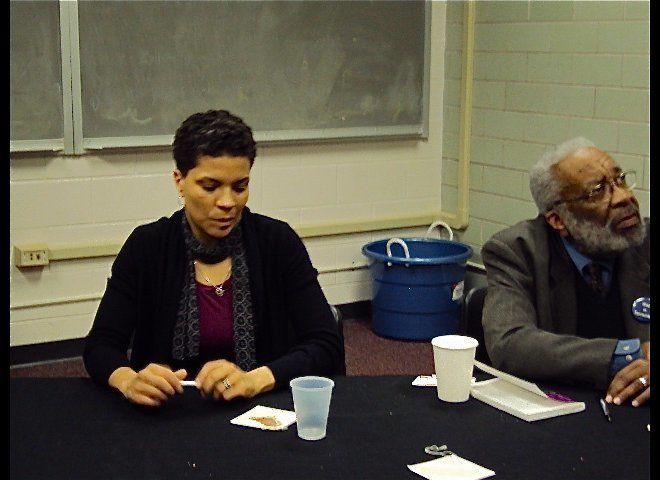