This post has been updated to include information from the article. See below for details.

Barack and Michelle Obama appear on the cover of the Us Weekly hitting newsstands later this week, further establishing their crossover appeal as both political and entertainment figures. The magazine will feature a six-page article on the Obamas' love story as well as an album of family photos. The cover is headlined "Michelle Obama: Why Barack Loves Her" and teases, "She shops at Target, loved 'Sex and the City' and never misses the girls' recitals. The untold romance between a down-to-earth mom and the man who calls her 'my rock.'" 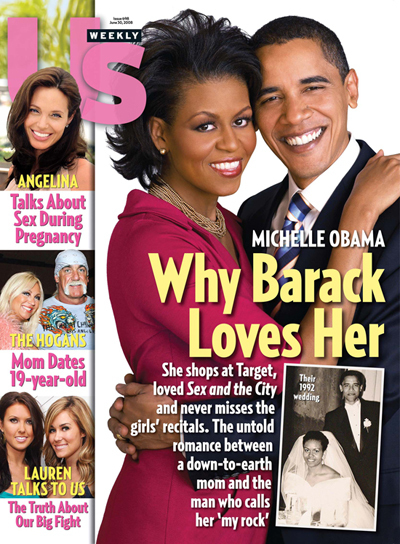 In February, Barack Obama sat down with Us for a Q&A (where he notoriously refused to answer the boxers-or-briefs question). That article, combined with Hillary Clinton's "My Worst Outfits Ever" spread critiquing poor past fashion choices, helped establish political figures' appeal to celebrity magazines, one of the new trends emerging from this campaign season.

An excerpt of the Obamas' love story was posted as UsMagazine.com Wednesday afternoon. The excerpt includes Barack's praise of Michelle as an "extraordinary mother" and the assurance from a longtime pal that Michelle is "not the least bit interested in being co-president." For the "full untold story on why Barack loves Michelle, her struggle to get pregnant, why she rejected Barack when he first asked her out, and how she took her best friend to see Sex and the City on opening day," pick up a copy of the magazine, which hits newsstands nationwide on Friday (Wednesday in New York and Los Angeles).