I admit it. I am a reality TV fanatic. I keep up with the Kardashians. My heart melts for The Little Couple. My summer is filled with Big Brother drama and Bachelor in Paradise. The fall has me Dancing with the Stars. The winter cold finds me cheering on my favorite American Idol and swooning over the latest Bachelor. One reality TV show that doesn't make the list is TLC's 19 Kids and Counting with the Duggars. It may be because in my opinion the Duggars are of a conservative family with views as outdated as their matriarch: Michelle's '80s hairstyle. For the most part my attitude is always "what ever floats your boat" that is as long as noone gets hurt. Michelle Duggar's recent comments against the transgender community are a direct hit at my son and I can't stay silent. My pitbull mom (as my son calls me at times) side needs to come out and grip Michelle and her followers with its teeth until their hearts are opened forever. 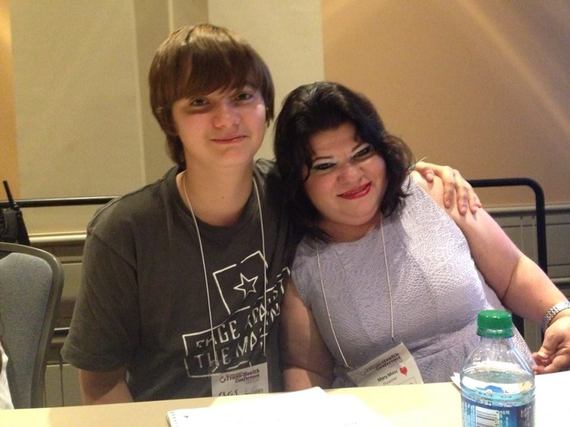 Michelle was quoted when discussing a potential new law that the City Council of Fayetteville, Arkansas is considering. This new law would protect citizens against discrimination in employment, housing and public accommodation on the basis of their sexual orientation, gender identity, socioeconomic background, marital status or veteran status. Michelle resorts to fear tactics when warning Fayetteville residents that she believes transgender people are: "child predators" and that the law would protect their predatory behavior.

Duggar claims that the bill will "allow men -- yes I said men -- to use womens' and girls' restrooms, locker rooms, showers, sleeping areas and other areas that are designated for females only." ... Duggar also suggests that gender identity is the "preference of an adult" and that should never be placed over "the safety and innocence of a child."

Michelle, I am appealing to you as one mother to another, but there is a difference: my child is transgender. I highly doubt you realize how damaging your words could truly be. I beg of you and your followers to educate yourselves before spewing such hateful and ignorant words again. Wayne Dyer states, "The highest form of ignorance is when you reject something you don't know anything about." Your ignorance, Michelle, could be hurtful to the children you claim to want to protect. This kind of pure ignorance is anything but bliss. 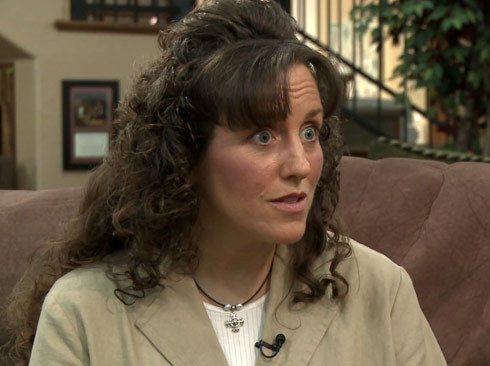 I ask, Michelle, that you educate yourself. You can begin with the recent Time article in May 2014 with the fabulous Orange is the New Black Emmy-nominated actress: Laverne Cox. This article, "The Transgender Tipping Point," features this beautiful woman -- yes I said woman -- who happens to be transgender. Although she plays a convicted criminal in her Emmy-nominated series she is far from a criminal as you suggest, Michelle. She is the first transgender woman to appear in Time magazine and to be nominated for an Emmy. She is breaking down barriers and advocating for this beloved community that you wish to tear down.

Michelle, you may want to continue your much needed education by reading the lovely Janet Mock's book: Redefining Realness: My path to Womanhood, Identity, Love and So Much More. Janet is a courageous woman -- yes I said woman -- who is also happens to be transgender. She is a strong advocate for the community and is revered for her work. Do either of these wonderful woman sound like child predators to you, Michelle?

In June 2013 the Mathis family won a victory with the Colorado States Civil Rights Division. The decision ruled that the Fountain-Fort Carson School District discriminated against the Mathis's young daughter who happens to be transgender, Coy, when they refused her the use of the girl's room. In this monumental decision Steven Chavez, the division director wrote: "that she must disregard her identity while performing one of the most human functions constitutes severe and pervasive treatment, and creates an environment that is objectively and subjectively hostile, intimidating or offensive." My son and I happen to know the Mathis family and their lovely daughter, Coy, -- yes I said daughter -- and they are far from predators. So who, Michelle, would protect Coy if she were in the stall next to your daughter?

Are you aware of the brave Maines family? My son and I are close friends with this wonderful family who fought for their daughters' life. Their lovely daughter, Nicole, happens to be transgender. She is a beautiful, funny and kind young lady -- yes I said lady. She was discriminated against in Maine when trying to use the bathroom she identified with-the girls room. In January 2014 after the Maines family spent years fighting for their daughters rights they won in Maine's highest court. Maine became the first state in the country to hold that transgender students have the right to use the bathroom of the gender they identify with not the bathroom that corresponds to the sex they were assigned at birth. The Maines family is the farthest from a child predator, Michelle. The Maines family has instead protected transgender children everywhere and my son and I are forever in their debt.

Michelle, I ask what would you do if your child were different from the rest and faced bullying and worse suicide? What if a public figure spoke hateful words that could add to your child's bullying and worse threaten their innocent life? My son was assigned female at birth and came out to me at age 12 as the boy he really was. I fought his high school with the help of the NYCLU and won his right to use the bathroom he belongs in, the boy's room. My son is the bravest young man --yes I said young man -- I've ever known. Your quick snap to judgment could add to my son's bullying and I won't stand for it.

I hope that as your children and grandchildren grow you will adopt a more open view of unconditional love and acceptance. You may want to take a look at a wonderful young lady, Jazz, who is a sensational advocate for transgender children everywhere. Jazz is cofounder of the Trans Kids Purple Rainbow Foundation. She is also the youngest recipient of the Colin Higgins Youth Courage Award. She has coauthored I Am Jazz which is the first of its kind story based on her journey as a transgender child. I would like to replace your message of bigotry and hatred with Jazz's recent youtube video below of acceptance and unconditional love. She is an amazing young girl -- yes I said girl -- who my son and I are lucky enough to call a close friend.

It seems even with your platform, Michelle, the Fayetteville City Council voted to approve the historic city rights ordinance anyway. The times they are changing, Michelle so I suggest you change with them. I challenge you, Michelle, to contact me via my email: transparentmary@gmail.com to have a heart to heart talk mother to mother. If you truly care about children as you say you do you won't delay and jump at the chance to make a real difference.

In the meantime, I'll enjoy the rest of my Big Brother season and look forward to dancing in the fall. I won't however be tuning into the Duggars 19 and counting. I think I'll stick with my fun reality TV instead and continue in my life where acceptance and unconditional love are paramount.

Mary J. Moss
Feisty single mom to a terrific 16 year old boy who just happens to be transgender
Email me at transparentmary@gmail.com