Michelle Guintu's upcoming exhibition is titled "Obsession" and it's not hard to see why. The artists craft sharp-edged, multimedia shrines to classic hip hop artists, pop stars and cult film characters. For Guintu, nostalgia isn't an ironic throwback but an intense fervor, and her artworks don't just namedrop, they deify.

"I choose subjects that I'm super familiar with and have a lot to do with my childhood," Guintu explained to The Huffington Post. "I guess I'm attracted to those things because I love those feelings I had growing up. Like when I listen to or watch something I get that deep heart-wrenching feeling sometimes; the kind of feeling where your eyes are blank because your eyeballs are nesting in that specific memory. Not to sound weird but sometimes it makes me wanna cry. I mean who doesn't like that nostalgic feeling? I just feel it more than the average person." 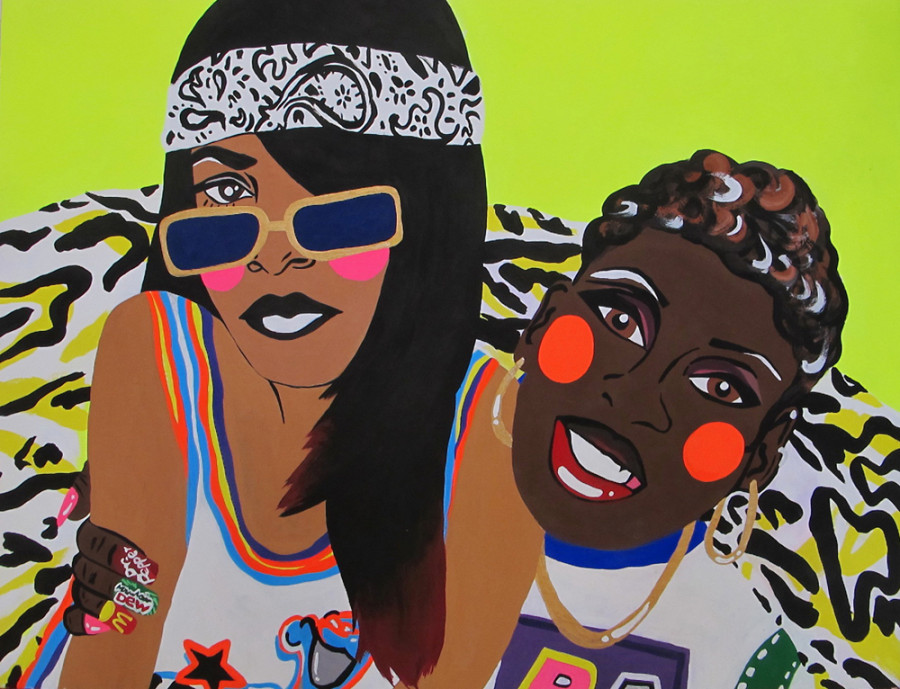 Lucky for us, Guintu has good taste. Her subjects include '90s royalty like Aaliyah, Missy Elliott, TLC and Lil Kim. There are also some '80s divas in the mix like Madonna and Cyndi Lauper. Her neon-tinged, pop-influenced style has been described as "kindercore" -- yes, that's part kindergarden, part hardcore for the uninitiated. We suppose if a badass art prodigy had a soft spot for N.W.A. this is what she'd create during craft time.

While a lot of Guintu's works are painted on canvas, some are composed of a motley jumble of media, from fabric to paper mache, effectively blurring the line between art and craft. "I hope that people can see I'm not just a painter but I can work 2D and 3D and still receive that same nostalgic feeling," said Guintu. "Also, that art doesn't have to be large-scale or look expensive to be rad and legit."