"Hitting our targets will require us to prioritize fundraising above all else and to focus the candidate’s time on it with relentless intensity," the memo, written in December 2013 and leaked to National Review, states in a section on the campaign's finance plan.

To reach the campaign's target of raising $15 million to $20 million for the entire race, the memo urges that Nunn's time be budgeted almost exclusively for fundraising, at least until the tail end of the race. Nunn, who would face no serious competition in the Democratic primary, should spend between 70 and 80 percent of her time raising money from January through September, according to the memo. Only in October does the recommended fundraising time drop to 50 percent.

The memo estimates that there are 2,500 campaign hours in 2014 and recommends that 2,201 of them be spent raising money.

The Nunn campaign did not immediately respond to a request for comment.

While the memo was merely offering suggestions -- it notes that Nunn did not meet the recommended hours for fundraising in 2013 -- the enormous amount of time involved demonstrates how the chase for money has consumed the modern political campaign. And not without consequences.

Decades of reporting and analysis of campaign fundraising show that political parties and candidates in both parties tend to tailor their policy priorities to the desires of specific donor communities. The Nunn fundraising plan does not shy away from doing just that.

The largest possible source of campaign funds is the business community, both in Georgia and nationally. According to the memo, Nunn, who now faces Republican businessman David Perdue in the general election, should appeal to corporate CEOs by adopting their policy priorities and talking points. This includes lowering the corporate tax rate and focusing on creating a "well-trained work force" -- the latter being a nod toward the alleged "skills gap," which CEOs have widely blamed for their lack of hiring in the post-recession years.

One major name in this category is General Electric CEO Jeffrey Immelt, who had "offered to host an event" for Nunn. Immelt is a major advocate of lowering the corporate tax rate. At the same time, his company paid an average federal income tax rate of 1.8 percent from 2002 through 2011 as it parked profits in offshore accounts, according to Citizens for Tax Justice.

In addition to the suggestion that Nunn adopt corporate America's priorities, the memo lists as advisers on issues like tax reform and the budget various deficit hawk groups funded by private equity billionaire Pete Peterson, which support slashing Social Security and Medicare. These groups include the Peter G. Peterson Foundation, Fix the Debt and the Concord Coalition. Fix the Debt was a lobbying effort funded by the nation's largest corporations, including General Electric, to take advantage of the "fiscal cliff" deadline at the end of 2012 and reduce the government's debt load by cutting social safety net programs.

Appeals to the interests of individuals and communities are, of course, the purpose of political campaigns, but critics of the role of money in politics point out that these appeals largely target the already wealthy, whose interests often diverge from those of the poor and middle class. That dynamic is evident in the Nunn memo. "Our primary focus with call time will be making major requests, 1) asking individuals to raise $10,000 or more either through an event or just as a raiser, and 2) asking donors who have maxed to contribute to the Nunn Victory Fund," it says, looking to people who can afford to make large donations themselves and know others who can.

The memo recommends that Nunn's time be focused on contacting only those donors who have given $1,000, but could give more; those who have already given the $5,200 maximum, but could give more to the victory fund, which redistributes money to the Georgia Democratic Party; and large donor candidates for the National Finance Committee.

Suggested messaging to other communities similarly emphasizes their policy priorities, including Nunn's stance in favor of marriage equality for LGBT donors and reducing student loan debt for young professionals. Among Jewish donors, the memo suggests, "Michelle's position on Israel will largely determine the level of support here."

Not all donor groups would get such direct messaging. The memo offers buzzwords and campaign pablum for others: A pitch to tech community donors should explain Nunn's belief in "the entrepreneurial spirit of Georgians" and how she "knows what it's like to do a startup."

The strategy memo also reveals some surprising details about how the campaign planned to spend money raising money.

After its major money source of fundraisers and large donors, the campaign saw its secondary money pot as online donors, whom it hoped to mine for $3 million. In the past 10 years, Democratic campaigns have become incredibly adept at raising small and medium-size donations from the party base over the Internet. The strategy outlined in the Nunn memo builds on this experience by looking to create a database of supporters through engaging potential donors on the issues, sponsoring online petitions and renting large lists, like that owned by the 2008 Hillary Clinton presidential campaign.

According to the memo, however, the campaign was not planning to budget any time or money toward direct mail fundraising. It is explained that Nunn did not want to engage in the kind of "red meat" contrasting of candidates that is needed to "generate an emotional response that results in mailing a check."

"Experience to date indicates that ... the candidate is not comfortable with this practice and therefore, the campaign should probably not spend the money," the memo states.

Beyond raising money for her own campaign, the memo indicates that Nunn was expected to raise at least $1 million for the Democratic Senatorial Campaign Committee to bring its resources into the race and $3 million for the Nunn Victory Fund to help fund the Georgia Democratic Party's get-out-the-vote efforts in November.

The strategy outlined in the memo appears to be working -- at least when it comes to money. The Nunn campaign had raised $9.2 million by the end of June, only slightly less than the memo's goal of $9.5 million.

See the campaign's fundraising targets below: 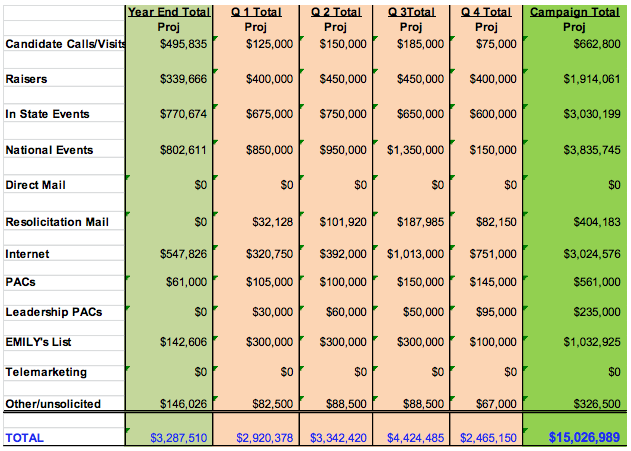