As the genealogist who initially researched the first lady's family tree (four to five generations on all branches), I wanted to love American Tapestry: The Story of the Black, White and Multicultural Ancestors of Michelle Obama by Rachel Swarns, but found myself disappointed -- mostly due to what's missing.

Having shared my findings with the author for the October 7, 2009 New York Times article that sparked the book, I thought that she would use that information as a starting point and advance our knowledge of Mrs. Obama's heritage. Though the article focused specifically on the story of mother and son, Melvina and Dolphus Shields, Ms. Swarns had repeatedly quizzed me about countless other aspects of Michelle Obama's family history. Could I tell her about the murder in Georgia? How was I able to discern that the Shields and Easley families, separated in slavery, were able to reunite after Emancipation? What proof did I have that Phoebe Moten had been widowed before the age of 21? Why did I think that the Jumper branch of her family, free well before the Civil War, possibly gained their freedom due to Native ancestry? And how could she use DNA testing to confirm what the 1870 census (seen above) so strongly insinuated -- that a white Shields male was the progenitor of this line, and that the first lady, like her husband, is part-Irish?

My disappointment stems from the discovery that the resulting book adds commentary from living relatives as well as context, but -- as seen from the blue Post-its in the image below -- tells us nothing new. These blue flags all indicate family details that had already been established at the time I shared my research with the New York Times, so the only true surprise in the book is the absence of over a third of Mrs. Obama's known ancestors. 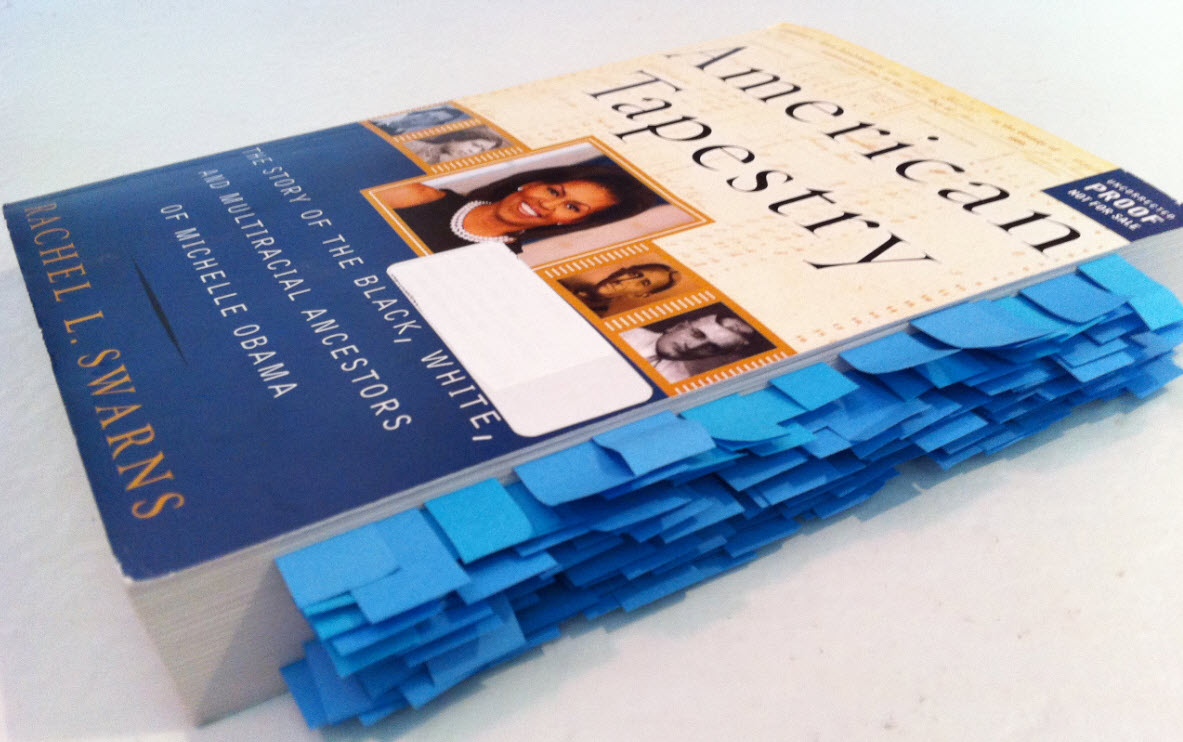 More perplexing still, it's the maternal half of the first lady's family tree -- her mother Marian (Shields) Robinson's side -- that's particularly overlooked. Though Michelle Obama has classic Great Migration roots winding their way back to at least eleven states, southern Virginia -- and especially Henry and Pittsylvania counties -- can claim more of her heritage than any other location. Fully a quarter of her ancestry traces to this area on the North Carolina border, but inexplicably, it's this portion of her family tree that's given short-shrift.

Since Ms. Swarns laced the book with so much historical context, I found myself wondering, for instance, why she left out the fact that one of Mrs. Obama's enslaved third great-grandfathers from this region had been inspected and deemed fit for duty to serve the Confederacy in the Civil War. Here was an opportunity to shine a light on a little known aspect of American history -- that slaves were often forced to serve the Confederacy -- but it was bypassed.

Similarly, I was surprised that she opted not to discuss the Morehead branch which was once owned by the sister of Governor John Motley Morehead, known as the "father of modern North Carolina." Situated near the Virginia-North Carolina state line, Thornfield Plantation, where Mrs. Obama's forebears lived and toiled, is still in the hands of Morehead descendants today and is now a National Bicentennial Farm. Every writer has the freedom to decide what to emphasize and what to exclude, of course, but I'm mystified by this glaring gap in the narrative. Why was the region that holds more of Mrs. Obama's past than any other so neglected?

It also bears mentioning there are areas of confusion and leaps of faith in the book. Conjectured and step-relatives are portrayed as blood relatives (which could admittedly seem like splitting hairs if it weren't for the use of DNA testing, which can make such distinctions critical), while some known blood relatives are otherwise described. Some endnotes make convincing cases for certain relationships and other claims unless you happen to be familiar with conflicting evidence that isn't cited. Family lore, which is intriguing but problematical in terms of reliability, is given heavy weight when it comes to topics such as escape from slavery and alleged Cherokee ancestry. And the "revelation" of the white ancestor via DNA testing is less than startling for those familiar with similar genetically-established relationships, such as those of Newark mayor Cory Booker who recently met some of his white cousins and the family of Roots author Alex Haley who has a warm relationship with their Scottish cousins. There is, in short, an element of wishful thinking and embellishment that wasn't necessary given how fascinating the First Lady's family story is on its own merits. As a genealogist, I'm skilled at solving historical puzzles, but the considerable holes in this American Tapestry leave me baffled.