Michelle Obama may not be a chef, but we have a feeling that it won't matter. Michelle Obama's first cookbook, American Grown: How the White House Kitchen Garden Inspires Families, Schools, and Communities will go on sale nationwide on April 10, 2012. The book will tell the story of the White House kitchen garden, and also focuses on healthy, affordable food for families and communities across America. American Grown aims to provide ideas and resources for communities to create gardens, support farmers' markets and make small lifestyle changes to achieve positive health results. The press release explains:

Mrs. Obama will describe how her daughters Sasha and Malia were catalysts for change in her own family's eating behavior, which inspired Mrs. Obama to plant an edible garden on the South Lawn -- the first since Eleanor Roosevelt's "Victory Garden" planted during World War II.

Today, the First Lady is appearing in Chicago for Let's Move's first annual food desert summit. Sam Kass, Senior Policy Advisor for Healthy Food Initiatives, told Obama Foodorama that the First Lady will eradicate all food deserts by 2017. "I firmly believe we can meet that goal, he said. "We're seeing amazing energy around the issue and communities really starting to begin to tackle this in ways that make sense to them."

See the full book cover below: 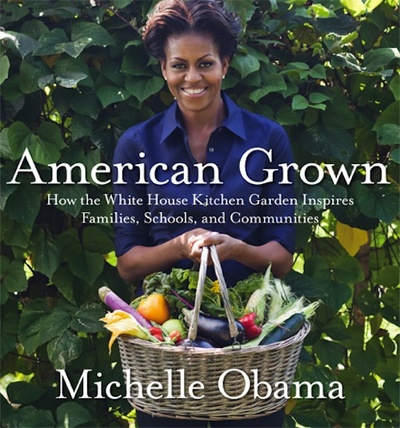