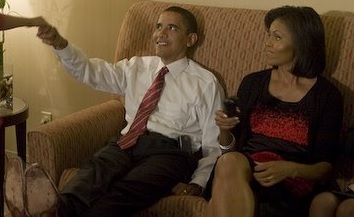 As President Obama continues to slug around the White House wearing flip-flops, a Von Dutch hat and earbuds in with the Yeezus album playing on the other end, in what seems like his final two weeks at work, rumors have begun to swirl around Michelle Obama's own lack of effort as the country's First Lady.

A long-standing advocate of youth health and wellness, and founder of the Let's Move campaign, sources have leaked that the FLOTUS has grown frustrated with her inability to rid the country of fat kids.

The source noted that Michelle's confidence has dipped and is coming to a realization that she is unable to fight the rival Treat Yo'self Movement. It's been reported that the president's wife has not been seen at a Let's Move meeting in more than two months, with speculation that she has locked herself in her room to binge-watch episodes of Friends on Netflix.

When reached for comment, the First Lady rejected the rumors, stating, "Could I BE more involved?!" as the distinctive sound of the sides of two fists banging together were heard through the phone.

"I'm not sure how this whole Friends-watching rumor started, but I think it would serve the country well to pivot, really PIVOT, our attention back on the Let's Move program instead of childish, false accusations."

Asked about her absence from the meetings, Obama continued, "Listen, I only missed, like, two meetings with the group -- we were on a break, but I've never given up on the campaign. It's my lobster."

She was pressed further regarding issues surrounding the menu items that have caused more than 1.4 million children to drop out of lunch programs nationwide: "Our unagi is very much directed towards this issue. We've taken a look at the food options that we've made available, and with adjusting the phalange, I think we'll be in a good place."

The First Lady was asked if comments made back in 2011 by former obese child and current fat man, New Jersey Governor Chris Christie, where he stated that he doesn't believe government should dictate and control the country's food options, were something that she thinks about as she sees the current struggles on the lunch line.

"I heard what he was saying, but it's like a cow's opinion. It just doesn't matter. It's moo," said Obama.

Sounding like a direct shot at Christie's weight, Obama continued, "Oh, no, I'm not calling him a cow, that's not what I meant, that was just something Joey had sai--" a White House spokesman had cut her off at that point and put us on hold, where we were left with an original rendition of what we believe was a song titled "Smelly Joe."