UPDATE: The offensive Michell Obama picture has reportedly been removed from the website, Hot Girls, that posted the image.

The Hot Girls blog posted a short explanation in Chinese, along with a loosely translated apology in English, explaining, "I am very sorry for this article, and that this is the program automatically issued a document from the article. Do not the subject of race and politics make the discussion too radical and sincere hope that the world is very peaceful." The Guardian also reported that the site took down the offensive image of Michelle Obama.

Google has purchased online ads in an effort to explain to users why an offensive image of Michelle Obama is appearing, and is ranked so highly, in its Google Image search results.

The Google ad, titled "Offensive Search Results," appears directly over the pictures of the First Lady that show up when users perform a Google Image search for "Michelle Obama." (see the screenshot below). 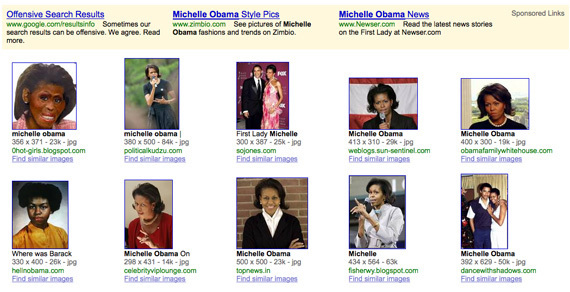 Google's advertisement reads, "Sometimes our search results can be offensive. We agree." It then continues with a longer explanation (read the full text here) on why certain search results appear, and why they may be highly ranked.

Sometimes Google search results from the Internet can include disturbing content, even from innocuous queries. We assure you that the views expressed by such sites are not in any way endorsed by Google. [...] We apologize if you've had an upsetting experience using Google. We hope you understand our position regarding offensive results.

The image was previously removed by Google on the grounds that the site hosting the Michelle Obama picture "violated Google's guidelines by serving malware to visitors," SearchEngineLand writes.

Now, however, the offensive photo has been posted to another site that does not violate Google rules.

SearchEngineLand points out that Google has taken out ads for other search terms that may turn up offensive results. An ad similar to the one featured with the "Michelle Obama" query turns up for Google searches for "Jew."