PHILADELPHIA, PENNSYLVANIA -- In its first night, the 2016 Democratic National Convention played host to First Lady Michelle Obama. All over social and traditional media outlets, her speech is being given high praise and many feel it could help thaw the ice between entrenched "Bernie or Bust" voters and mainstream Democrats. However, in a shocking turn of events, it appears that Mrs. Obama may have been guilty of doing the same thing that Melania Trump did at the Republican convention last week -- plagiarizing Michelle Obama.

"We have it on good authority that the speech given by the First Lady last night was the work of blatant plagiarism," Richard Coleman of the Americans For More Liberty and Freedom League told reporters at a press conference outside the headquarters/laundromat near his home." 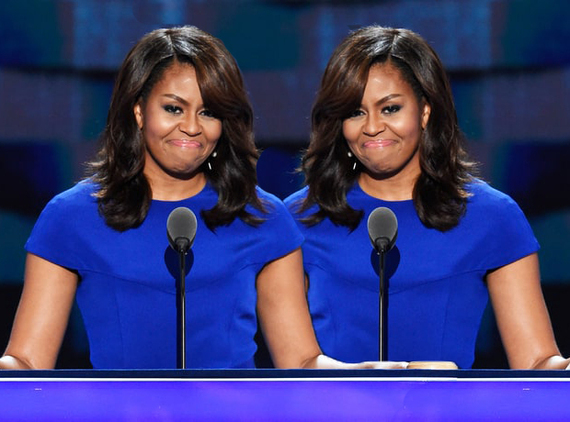 Coleman says that anyone with "half a brain can tell" the First Lady's speech was actually "written by Michelle Obama and/or her team." Mr. Coleman said he "know[s] for a fact" he's heard many of the same things Michelle Obama said in her speech somewhere else. Namely, in other Michelle Obama speeches.

"It just seems kind of odd to me," Coleman said, "because I know for a fact that I've heard Mrs. Obama talk about the importance of unity and doing things together. I'm pretty sure I've heard her speak about what it's like to be in the first black First Family in our country's history."

As chairman for the AFMLFL, Coleman says it's his job to call out politicians when they act like hypocrites. He says that he understands why Mrs. Obama would steal her material from Mrs. Obama, because she's such a "tremendous and gifted speaker." This is why Melania Trump's speechwriter used passages from the First Lady's speech as well. He just doesn't think Mrs. Obama should get away with plagiarizing Mrs. Obama if Mrs. Trump was criticized for it.

Mr. Coleman says he plans to do extensive research to determine just how much of Obama's speech she plagiarized from herself.

"I will scour every YouTube video, Vine, and SnapChat I can find," Coleman said, "and I will not stop until I figure out just how much of her speech Michelle Obama stole from Michelle Obama."

Reached for comment, Melania Trump said she "really enjoyed" Mrs. Obama's speech and she looks forward to hearing it again when she delivers it in another four years.