If the pregnancy rumors that are swirling about Michelle Obama are true, then the new presidential couple have truly hit the recession with a trifecta punch.

#1, The $819 billion economic stimulus, #2: The Obama family females — Michelle, Malia, and Sasha — who have kicked off a style stimulus. And now, slamming it out of the ballpark, they will have ignited an emotional stimulus.

There's almost nothing that this beleaguered country could use more now than an adorable Obama baby. In fact, we need it so badly, that if Michelle isn't already knocked up with #3, she and Barack should start trying immediately. Star magazine actually reports that Michelle has already consulted with fertility experts at Northwestern University in Chicago. Nothing would epitomize the new optimistic spirit of change, hope, and rebirth more than a baby born into the White House.

And talk about harkening back to an earlier era of inspiration. The last time there was a baby birth, Jackie and John F. Kennedy were the parents.

The photos and antics of Caroline and John John cavorting at 1600 Pennsylvania Avenue, captivated the American public in the '60s.

with a pregnancy, the Camelot-ian charisma of the Obamas would be catapulted into the stratosphere.

Just think about the gift this baby will give to many hurting industries. First off, the media would be blessed. Celebrity newsweekly covers would have weeks of the question mark story: Is She or Isn't She Pregnant?, then there would be months to follow the growth of The Obama Bump. I'm already guessing if that's why Michelle looked a little thick in her chartreuse Isabel Toledo inaugural day outfit. Before, the rumors, I chalked it up to a possible bullet-proof vest, layered under her dress. Now, however, I'm wondering if that's also why the new First Lady chose such a big-skirted ball gown. In re-examining photos of the night, I've been eyeballing her dress from different angles to see if I perceive any telltale bulge.

A baby on the way could explain the excessive inaugural night Presidential PDA. The Obamas' public nuzzling and snuggling was highly reminiscent of the Brangelina public smooching just before they dropped their twins bombshell.

Twins! Can you imagine the level of public hysteria — in a good way — if the Obamas were also cooking up a pair!

Speaking of Brangelina, the Obama baby would no doubt blow Brad and Angie's twins off the top-selling covers list.

While Knox and Vivienne raked in newsstand sales of 2.6 million for People magazine, the Obama baby pics would without question cause servers to fail worldwide, TV ratings to soar, and multiple magazines to sell out. I say this because Obama baby photos would most likely be posted democratically, for all to see and download from the Obamas' own public web site.

But an Obama baby wouldn't just stimulate the media industry, including paparazzi sales, just think of what it will do for the entire baby service industry. Moms across America will want to
purchase the same stroller, car seat, booster, bassinet, sippy cup, and wardrobe as the new mini Michelle or Barack.

And best of all, we'd finally get a break from the dreary economic news. Instead, we can look forward to the new front page headlines: Michelle: Breast or Bottle?; The Childbirth: Epidural or
Natural?; First Lady Balancing Act: Can Michelle Do It All?

The Obamas' own personal baby boom could have another positive consequence — a national one. Bad economic times usually translate into a drop in the birth rate. During the Great Depression, births plunged 15%. Well, the last thing America needs with its quadrillion dollar deficit is a smaller future generation of taxpayers to pay it off.

The Obama Boom can help us offset that now.

When the U.S. was in the depths of the depression in the 1930s, one of the few inspiring distractions was the little horse that could — Seabiscuit, who just kept winning races against all the fancier, more pedigreed stallions.

An Obama baby could be our generation's Seabiscuit. If our president and his wife, can love each other enough and believe in the future of this country enough, to deliver the gift of a baby, then we, too, can believe a better day will come and we'll be extra-inspired to work
hard to help it along.

So Obamas, if you care about what's good for America — if a bun isn't already in the oven, cancel a State Dinner, get into the Lincoln Bedroom, and get busy! 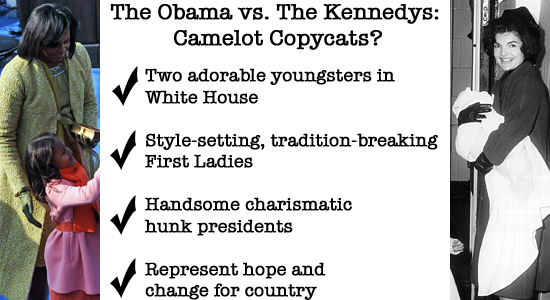 For more of Bonnie's discussion about Michelle, follow her at twitter.com/bonniefuller.