Given her impeccable wardrobe, Michelle Obama doesn't have many fashion regrets. But during a taping of BET's "106 and Park" this week, the first lady admitted that she does regret that time she wore shorts on Air Force One because it caused "a huge stink."

The "stink" she's referring to happened in August 2009 when the Obama family was on vacation in Arizona. For a hot summer day touring the Grand Canyon, Michelle chose to wear a white tank, a checked button-up shirt, sneakers and a pair of casual gray shorts. The world got a look at her outfit as she exited Air Force One.

The fashion choice was subject to immediate backlash, she recalled on BET, "because people were like, 'she's wearing shorts getting off of Air Force One.'" Michelle added, "Sometimes I forget I'm the first lady and I'm running around in shorts."

To be fair, there are many who didn't see wearing shorts and being a first lady as mutually exclusive. Back in 2009 after the incident, 59 percent of HuffPost readers polled said that "absolutely" the first lady had "the right to bare legs."

Alas, on "106 and Park," Michelle said she won't wear shorts on Air Force One again. Do bermuda shorts count? 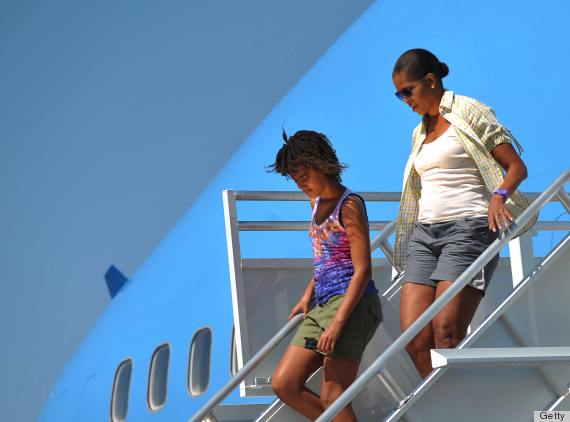 How do the shorts compare?