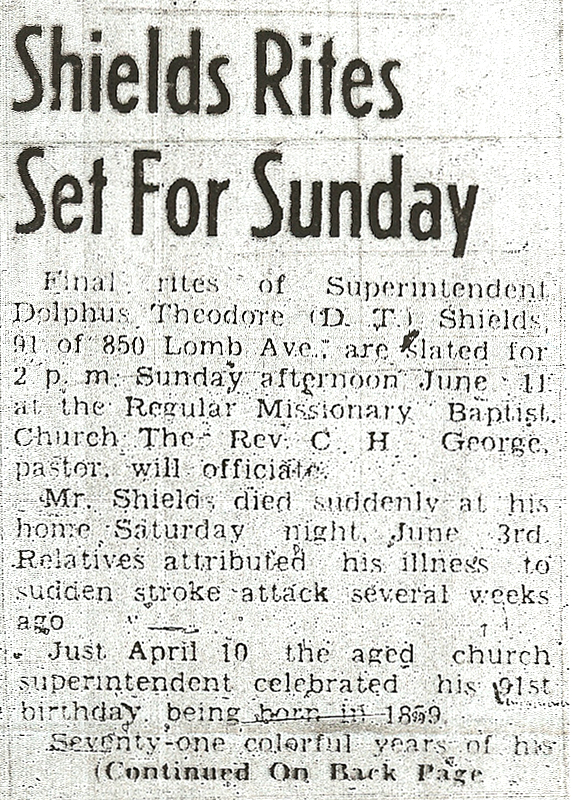 This is the seventh in a series about the ancestry of the first lady. The previous segments can be found here:

Like his future wife, Michelle's maternal grandfather, Purnell Nathaniel Shields, arrived in Chicago as a youngster. He was the second of three children born in Birmingham, Alabama to Robert Lee and Annie Shields, but before his tenth birthday, both his father and younger sister would be out of his life. In the early 1920s, his mother Annie married a man named Frank Coleman and joined the northward trek, bringing her remaining children with her.

Following in the footsteps of his father and grandfather, Purnell was a carpenter, but finding difficulty securing construction jobs, he spent much of his life churning through an impressive array of positions including laborer in a syrup factory, turntable engineer for the Northwestern Railroad (that is, one of the fellows who changed the directions of trains to make return journeys), relief worker for the city, garment worker, and building decorator.

Even though Purnell's father, Robert, was a bit of a mystery man, more is known about the Shields branch of Michelle's family tree than any other. Robert's father, Dolphus Theodore (or D.T. as he preferred to be called), was married four times (partly because he outlived several wives). Robert was D.T.'s third child from his first marriage to Alice Easley. He would also be the last one born in Georgia before the family moved to Birmingham.

D.T.'s mother, in turn, had begun her life in Spartanburg, South Carolina. Born into slavery, Melvina was sent south to Georgia upon the death of her first owner, David Patterson (read more about this in the "Finding Melvina" chapter of Hey, America, Your Roots Are Showing). Shocking as it sounds to us today, his estate assigned her a price tag of $475 and doled her out to David's daughter, Christianna Shields, to help ensure that all of his children would receive an inheritance of roughly equal value. It was in Georgia that she encountered the white man who would father at least four of her children, including Dolphus.

In spite of his white father, Dolphus was also born into slavery. Like his mother who lived nearly a century, he enjoyed a generous life span of 91 years -- long enough to witness the initial stages of desegregation and just 14 years shy of Michelle's birth. Known to be an optimist in matters of race, D.T. lived in hopeful expectation, but even today, it's stunning to think that the life of this one-time slave overlapped with that of his great-granddaughter, Marian, who now resides in the White House.

(to be continued)
Download
Calling all HuffPost superfans!
Sign up for membership to become a founding member and help shape HuffPost's next chapter
Join HuffPost