Is Michelle Obama supposed to wear a burka? Since when are a woman's arms considered an erogenous zone here in America? Why would it be inappropriate for the First Lady to attend her husband's address to Congress in a beautiful, purple Narcisco Rodriguez SLEEVELESS dress?

Whoever those twitterers — or should I call them "twits" — are out there who have raised the question of propriety, they should not only get a life, but also a history book. Not only have many First Ladies been photographed at official state and White House events, America's most fashionable previous First Lady Jacqueline Kennedy practically made sleeveless looks her uniform, whether they were dresses or two piece shirt and skirt ensembles. 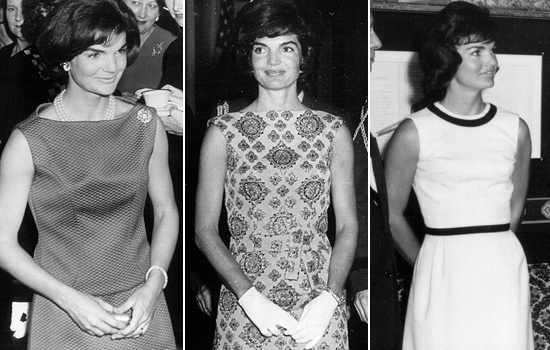 "We wore sleeveless dresses all the time," Letitia Baldridge, Jackie Kennedy's social secretary, tells me. "It was the fashion of the times and it was fine then and is fine now for wearing in the White House. It's not like Mrs. Obama was going to see the Pope, or like she had her bosom popping out — that would have been immodest. There's nothing immodest about showing your arms!"

Now, those going nuts over 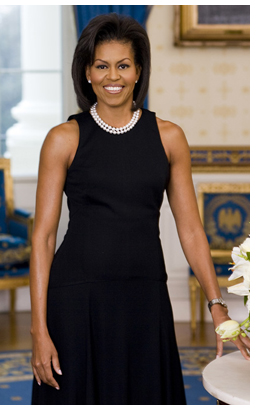 "Sleevegate" probably really have their knickers in a knot over Mrs. Obama's recently released official White House portrait in a sleeveless black crepe jersey gown by American designer Michael Kors. Kors happens to have been known over the years for his sleeveless styles so it was only a matter of time before these two teamed up.

Apparently, the gown, which is cropped in the photograph to look like a dress, was custom-made from his spring collection fabric and Kors had no idea that any of the pieces that Michelle Obama ordered might end up as her official portrait outfit. Since Michelle, like the rest of us these days, re-wears even her most public outfits, expect to see her show up at an official black tie event in it. And for those, who also value sleevelessness, you can buy it at Bloomingdale's in royal blue, for $3,195. Kors is considering whether to add a less expensive version to his MICHAEL by Michael Kors collection.

The designer calls Mrs Obama "modern" and "confident" and says that his dress exemplifies that with its "clean, timeless elegance."

I actually think her look says even more than that. Michelle's sleevelessness conveys the fact that she is ready to get to work as First Lady, doing everything that she can to help the American public. It's her variation on the look that men use to visually telegraph the fact that they are hard at work on important business. When the President is rolling up his shirt sleeves, we know we're being told that his job is far more than ceremonial. Michelle's saying that exact same thing.

Michelle's also giving us another not-so-subtle message — she's strong and tough. Those arms with their well-defined biceps 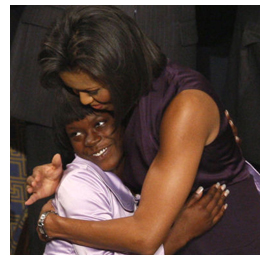 (and let's not fail to mention her beautifully sculpted shoulders) look powerful enough to wrap around a distressed nation and lift it up. She's no frail, half-starved Nancy Reagan type who doesn't rub shoulders with the masses. On the contrary, Michelle Obama is a big hugger and doesn't restrict her hugs to big ticket donors or Hollywooders. At her husband's address to Congress she warmly hugged her seatmate, 8th grader Ty'Sheoma Bethea from Dillon, South Carolina, who had written to the president for help fixing her failing school. Michelle's strong arms convey the message that if she can personally hug and lift us out of a lousy economy, and a lack of top healthcare or education for everyone, she will.

Maybe some of those sleeveless critics are just jealous of Michelle's fine form and aren't willing to lift anything more than their forks. Pasternak says you need to do three sets each of "Lying Down Dumbbell Tricep Extensions", "Dumbbell Hammer Bicep Curls" and "Dumbbell Lateral raises, to achieve her toned shape.

Envy is exactly what's at the root of any Obama bare arm criticism according to Glenda Bailey, editor-in-chief of Harper's Bazaar.

"Anyone who criticizes Michelle Obama's right to bare arms is jealous of how gorgeous and elegant she looks when she does so," she says.

As for the fashion professionals, whose job it is to dress us appropriately, how do they rate Michelle's sleevelessness?

"If your arms and underarms can handle it, stay with it. There's nothing about being a First Lady and going sleeveless that's disrespectful," pronounces Polly Mellen, the legendary fashion editor of Vogue for 30 years.

"She picked a fabulous dress and she looked fabulous," says Ann Keating, vice-president of Bloomingdale's.

"Only if she had flabby arms, would she be in bad taste," concludes Jackie Kennedy's Baldrige — and SHE would know!