First lady Michelle Obama is indisputably the Democratic National Convention's woman of the hour. During what will go down in history as the speech of her life, she highlighted not only her fierce support of Hillary Clinton, she put forth the vital need for political leaders to set positive examples for today's youth, and for Americans to listen to each other and lean on each other, because "we are always stronger together."

My question is, can we -- the American people, walking the streets and using social media every day -- apply what she said to the way we address one another, in spite of having opposing political views?

"I want a president who will teach our children that everyone in this country matters." - FLOTUS 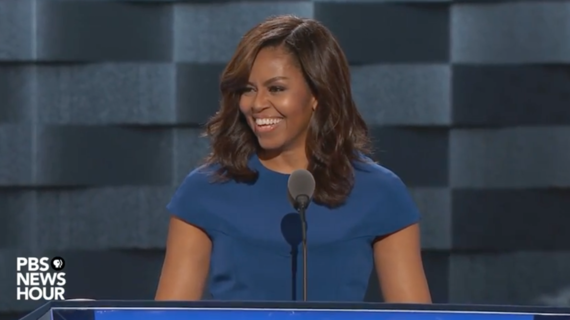 As I listened to the first lady speak, I thought of the kids I mentor and have written about over the years, the teen activists and entrepreneurs, who are fighting for LGBTQ rights in India, inventing new ways to detect cancer, and building global movements to eradicate hate. I recalled all the remarkable things they've taught me about compassion, drive, and the beauty of creating without letting mentally manufactured obstacles get in the way. As anyone who works with a hyper-connected, collaborative teen knows, young people teach us everything we need to know about how we can be more evolved.

Based on the death threats some of my Republican friends have received and the angry, knee jerk language that's being spewed across the web, it's safe to say plenty of us aren't genuinely listening to one another. Democrats and Republicans alike are ripping each other to shreds online and off, and the country is becoming more divided. Debates are becoming more hateful and reductive.

How open and tolerant are we really?

As a liberal, most of my social media feeds are blazing with #ImWithHer and #NeverTrump rhetoric. This begs the question, how "liberal" and expansive am I really if I constantly immerse myself in opinions and biases that are the same as mine?

Once an immigrant in the U.S. through international adoption and now an expat in the UK, I've always considered myself open and worldly. But this is because I've had the luxury and freedom to be this way. Not everyone does (nor do they want to). In fact, a large percentage of the U.S. population planing to vote for Trump -- white working class Americans -- does not.

Much to the dismay of many of my British friends, the current parallels between U.S. and UK politics are undeniable. Gun violence excluded, the divisions both parts of the world are reeling from within their own societies have always been there. Brexit and the U.S. presidential election are bringing the gaps to the surface. So how do we mend the fractures?

I don't have the answers. But through asking questions, perhaps we can find some common ground together.

A friend of mine is planning to vote for Donald Trump in November. And no, we haven't "defriended" each other. Instead, he graciously agreed to let me interview him. We barely scratched the surface, but if anything, what my friend shared is another example of the fact that politics are not black and white.

MJR: What are your biggest reasons for voting for Trump?

Trump Voter: While both parties have Mideast solutions in mind, I would like to vote for a candidate who has a strong heart for Israel. While that may seem selfish, and it definitely has caused me to lose a few friends who have family from or living in Palestine, I find them to be our strongest ally in the Mideast. This does not mean I am calling for the destruction of Palestine. I would love for Mideast peace to happen, but feel that the current administration made no true effort for this process to happen.

MJR: What do you want people to understand about Trump voters?

Trump Voter: I would like for people to understand that not all Trump voters are racist, pro-gun, anti-LGBTQ marriage/rights, etc. I believe in LGBTQ rights. I believe in the Second amendment, but not the possession or use of assault weapons. I believe in immigration, and allowing people into our country who will benefit from it and give back. There are many other Republicans like me, but we are drowned out by the left, who classify all of us as all the things I just listed. I finally make an announcement, and I am criticized and threatened.

MJR: What criticisms and threats have you received?

Trump Voter: I have received a large number of negative reactions from a lot of people -- A LOT -- including friends, coworkers and former colleagues. Most do not understand how a Jew would vote for Trump. They claim he hates Jews, etc. One person stated that they would never hire me due to my voting choice, no matter how qualified I am and how well the interview process went. That response caused others to chime in both online and offline, both in a positive and negative light. Because of this one comment, which was 50+ replies long, I had past employers side with this person, and declare that they would never trust or work with me ever again. They feel that my decision-making process is delusional, and believe that decisions I may make at their company would be detrimental to its success.

My father is a Republican and a doctor like most of my extended family. Would these people who said they would never hire me because of my choice judge my father's advice or recommendations to their health because he is a Republican? My father is amazing at what he does, and truly loves his profession.

The Trump voter's words are not the words of a xenophobic, fear mongering bigot. They are the words of someone who has specific priorities, as do we all.

Many parts of America are in crisis, and whatever happens come November, a large percentage of the population is going to be angrier than it is now. Anger can be a good thing. Sometimes it's what we need to light the fire, get off our asses, and do something proactive. But letting the anger fester against one another could be the downfall of longstanding friendships and communities if we let it. It's already happening to some.

As I live life overseas, feeling sensitive, worried, yet hopeful about America, every now and then I hear people here in London speak with disdain about my country (at times with good reason).

My friends in America, there are enough people in the world hating the US. Let's not give them more reason to keep doing it. Let's get off of Facebook and talk to someone with opposing political views, and let's try to listen. We might learn something.