It began as a harmless radio station prank, but soon took on a frightening life of its own. In 1987, WTCM Radio in Traverse City, Mich. played a staff-produced song called "The Legend" about a creature called the dogman as part of an April Fool's stunt. Set against a backdrop of haunting music, the song recounts a century of Michigan encounters with a horrifying doglike creature that walks upright like a human being.

The song didn't get any immediate public reaction, but later that day the station began to receive calls from people who had claimed to have seen one of the beasts. The song was written by Steve Cook, a disc jockey with an interest in folklore.

"I had never heard of anything called the dogman before I wrote this song," Cook told The Huffington Post. "I had no idea that it was already a part of northern Michigan folklore and certainly had no idea that people were seeing it."

(CLICK HERE TO LISTEN TO A SHORT CLIP FROM THE SONG)

Although the song cites a 1887 incident in Wexford County, Mich. involving a run-in between lumberjacks and a dog-like creature, some of its references come from outside the state -- and some were borrowed from run-ins with other strange creatures like bigfoot, the Jersey Devil, and the chupacabra.

In the 25 years since WTCM first broadcast "The Legend," Cook said he has received about 500 reports of dogman encounters. Of those, he believes about a hundred "seem plausible and credible and just a little too weird to explain away."

One of the more memorable accounts involved a 13-year-old girl who had never heard of the dogman. The girl, Courtney, was sneaking a smoke behind her family's home near Reed City, Mich. in the winter of 1993, when she noticed a glint of light coming through the planks of an abandoned barn. After watching for a few minutes, she realized a six-foot tall creature with the head of a dog was staring at her -- and ran away. Later she spoke with a neighbor who claimed to have seen a buffalo-sized dog in the same barn.

More recently Cook received an email from a Fowlerville fireman who claims he saw a gorilla-shaped creature with a canine head race over 100 feet into a wooded area in a period of three or four seconds. Linda S. Godfrey is a Wisconsin-based author and investigator who has been looking into the existence of creatures that fit the description of dogmen, which she calls "upright canines," since 1991. She told The Huffington Post that she's received reports from all over the country and that Michigan -- particularly the area around Kalamazoo and anywhere in the range of the state's Manistee National Forest -- has become a hotspot for creature sightings.

Godfrey first became interested in the subject while working as a reporter for a newspaper called the Walworth County Week. After hearing rumors about a werewolf-like creature , she wrote a story about a creature now known as the "Beast of Bray Road," which was thought to lurk in an area around Elkhorn, Wis. The article attracted a lot of attention and, like Cook, Godfrey became a go-to person for those who wanted to share accounts of run-ins with these creatures and similar beasts. Since that time, Godfrey has written several books on the creatures and is now considered an authority on the topic in the cryptozoological community. 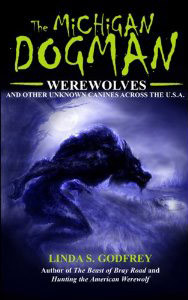 Although she said legends of the loup garou, a french term for werewolf, can be traced back to the late 1700s and early 1800s in older settlements like Detroit, definitive reports of upright canines didn't really start appearing until the 1930s. Unlike the werewolves of Hollywood movies, Godfrey said this type of creature doesn't have human features and doesn't transform from a person into a wolf.

"It's fully canine, walks on its hind legs, uses its forelimbs to carry chunks of ... roadkill or deer carcasess." she said. "They have pointed ears on top of their heads. They have big fangs. They have bushy tails. They walk -- most tellingly -- digitgrade, or on their toe pads, as all canines do, and that's something that a human in a fur suit really can't duplicate."

Godfrey said witnesses are usually scared to death by the creatures, but after 20 years of receiving reports she can't cite one serious injury from an alleged encounter.

She believes those who contact her are sincere, but adds that she has not seen one herself and has yet to see convincing photographic proof of their existence.

In 2007 a video known as the "Gable film" (SEE FILM ABOVE), which some believed had captured images of a dogman, began to circulate on the internet, but was later revealed to be a hoax on the History Channel's "MonsterQuest" television show.

Animal tracks are the best evidence Godfrey can point to as support for the existence of upright canines. She said she has a cast of a paw print from Rock County, Wis. that is more than six inches in length and width -- far bigger than a timber wolf. After so much time investigating the creatures, however, she still doesn't know what to make of the reports she receives.

She speculates the creatures could be some kind of rare, indigenous adapted canine species -- a wolf-dog hybrid. There is also a more supernatural explanation for their presence. Godfrey spoke with an elder from the Ho-Chunk Native American tribe who believed they were spirit creatures from another place that assume a physical form while in our realm.

Steve Cook, author of the dogman song, said he spoke with an elder from the Ottawa-Chippewa tribe in the 1980s who believed dogmen were members of a shapeshifting skin-walker tribe who became stuck somewhere between their human and animal forms.

As for his personal beliefs on dogmen or upright canines, he's skeptical about their existence. Cook thinks there's probably a natural explanation for most of the reports he receives -- though he adds that he's not arrogant enough to think human beings know everything that goes on in the wilderness.

The dogman troubadour -- who admits he played a role in perpetrating the Gable film hoax -- said he tries to take an entertainment perspective on the sightings. He said the popularity of his song has allowed him to raise more than $60,000 for various animal charities. It's also inspired a feature film, "Dogman," directed by Richard Brauer, which debuted in Traverse City last year.

Cook also says he's amazed how the legend of the creature has woven its way into the state's culture.

"The morning guy who originally asked for the bit back in 1987 told me years ago that this thing is going to live a lot longer than either he or I will. It's going to be around for generations longer then anyone who remembers even that it was a song," he said. "It's a unique creature. It's not just a variation of bigfoot. Its not a Jersey devil. It's not some ghost. It's the Michigan dogman and people love to have their own homegrown folklore."

To find out more about Steve Cook's song "The Legend" visit www.michigan-dogman.com. Linda S. Godfrey can be contacted at lindagodfrey99@gmail.com.