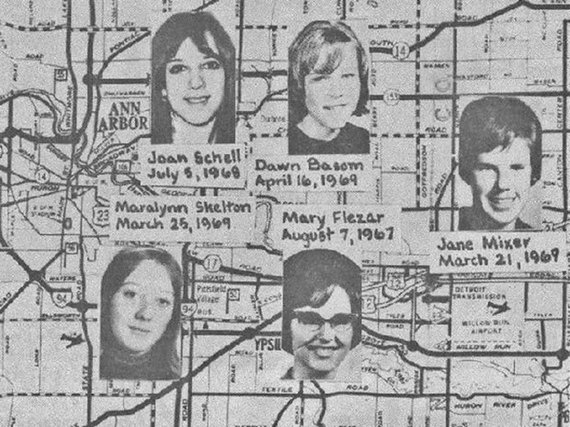 Ypsilanti, Michigan was a safe place to live in the peace and free love era of the 1960s--until the bodies started piling up.

Over the course of three years, a serial killer referred to as the "Ypsilanti Ripper" (pronounced Ip-sih-lan-tee) tortured, killed, and mutilated half a dozen victims. All were female college students; all were missing one or more limbs.

But what was most terrifying was the discovery of the killer's identity: an all-American boy, who wasn't at all what he seemed.

In The Michigan Murders, Edward Keyes gives the enthralling true account of the savage murders that tormented a Midwestern town.

READ AN EXCERPT FROM THE TRUE CRIME BOOK BELOW.

At midafternoon on Friday, in the sparsely inhabited northeast section of Ann Arbor, two construction workers became aware of something odd.

It was a muggy, hot day, and the men were taking a five-minute water break from the sapping toil of excavating storm drains for a new subdivision off Glacier Way. Slouched along the edge of the trench, their bare torsos running with sweat, breathing deep, they were silent until one, Tony Cola, cocked his head a moment, then said to the other: "There must be something dead around here."

Caleb Freeman groaned, "There sure is. And I'm sitting on it."

"No, really," Cola insisted. His nose lifted again, testing the air. "Smell... Do you smell it?"

Freeman sniffed and his face began to pinch up. "Christ! Did you lay one?"

"Up yours." Cola got to his feet. "I tell you, there's a dead thing around here someplace." He started prowling tentatively through the high browned-out grass and weeds along the shoulder of Glacier Way. Freeman, bemused, tagged behind.

After a dozen yards, Cola halted stiffly. When he turned back to the other, his features were contorted. He pointed toward a clump of growth a few feet ahead of him. Freeman couldn't make out anything at first. He moved closer, and then he saw it: part of a bare arm protruding from the grass, elbow bent at an awkward angle, skin grayish, slack, lifeless.

Freeman edged past Cola to the spot. The arm was part of a body, which appeared to be nude. The stench was awful, but Freeman made himself bend and part some of the tall grasses. Almost instantly he had to recoil.

It was a woman. It was hard to tell how old, because not only was much of the thin, pale body slashed and caked with blood but from the bosom and upper arms to the head the skin was black, peeling with rot. Where the face would have been was a fearsome charcoal death mask, the mouth frozen open in a wide, silent scream, the teeth huge and sneering like a skeleton's because the lips were gone; the sunken eyes were also open, showing only blank whites.

Freeman and Cola ran to find their foreman, back down the road. Lane Beasley, who for a brief recent period had tried his hand as an Ann Arbor police officer, listened to the two panting men with some curiosity. Were they pulling his leg?

He saw soon enough that it was no joke. Beasley examined the scene with what he hoped was the care learned as a policeman. The dead woman's muddy clothing was bunched around her neck--white undergarments and a blue dress of some type--like some grotesque clown's collar. The body lay on its right side, arms thrown out from the trunk. The face was horrible, unrecognizable. In the black, swollen left ear lobe was a round golden earring. Beasley noticed that some of the damp grass around the corpse appeared to have been trampled, indicating that some other person or persons had been there recently. Yet, though the body was mottled with dried blood, there were no traces of blood on the grass or ground.

Beasley rose, faintly sick from the sight and the smell, and said to Freeman and Cola, who had held back: "You stick by and don't let anybody near. I'll go call the police."

The Michigan Murders is available on Amazon.