WASHINGTON -- Four years ago, former Massachusetts Gov. Mitt Romney won the Republican primary in Michigan, the state where he was born and raised while his father served as its governor. Yet two new polls released Monday show Romney trailing former Pennsylvania Sen. Rick Santorum who, just weeks ago, was barely breaking into double digits.

Santorum's gain is striking, but eerily reminiscent of similar surges by former House Speaker Newt Gingrich that failed to persist, most recently in Florida in the aftermath of his South Carolina victory. The movement to Santorum in Michigan is consistent with the trend in national polling, but the recent volatility in the Republican race is a warning that Monday's polling snapshot may not persist.

An automated, recorded voice survey conducted by the Democratic Party-affiliated firm Public Policy Polling (PPP) gives Santorum a much larger, 15 percentage point lead over Romney (39 to 24 percent), and shows roughly half as much support for Gingrich (11 percent) as the ARG poll but exactly the same support for Paul (12 percent). 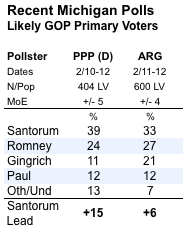 The two pollsters have generally obtained similar results during the 2012 Republican primaries, and last minute surveys by the two firms caught the late surge of Rick Santorum in South Carolina with remarkable accuracy. In this case, however, their results diverge.

One possible reason for the differing margins on the two polls is that Santorum's lead is larger than Romney's (36 to 25 percent) on the ARG poll among the subset of Republicans who say they will definitely vote on Feb. 28. Romney leads Santorum (33 to 22 percent) among those who will not definitely vote. So it may be that the PPP measures a potential Republican electorate that is effectively narrower and more likely to vote than the total sample interviewed by ARG. 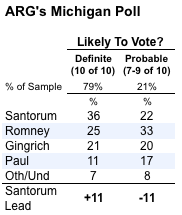 Aside from the differing margins obtained by the two polls, the bigger issue is whether this surge of support for Santorum will persist. Horserace polling on the Republican presidential race has produced many shifts in support for various conservative candidates that quickly faded. As Gallup has reported, the national lead has switched nine times in its polling over the course of the campaign, and given the trend toward Santorum on its daily tracking, may be on the verge of switching again.

Previous surges have translated into surprise victories that validated the final polls, such as the late movement to Gingrich in South Carolina and to Santorum in Iowa. But others have been fleeting, particularly the brief increases in support for Gingrich just prior to the Iowa caucuses and the Florida primary.

The ability of the Romney campaign and its allies to overwhelm Gingrich with negative advertising is one reason why these gains quickly faded, but another may be that the upticks were temporary reactions that inevitably subside. As a new Gallup analysis points out, in moving to Santorum nationally, Republicans are "responding as they have each time there has been a big win or an upset in the caucuses and primaries thus far -- by jumping on the winner's bandwagon."

Will Santorum's apparent surge in Michigan and nationwide fade like the previous movement to Gingrich (or, for that matter, like the smaller movement to Santorum after Iowa)? The underlying conditions that have fueled the volatility in polling in the Republican race have not changed. The most conservative Republicans remain unconvinced that Romney shares their outlook on issues -- if anything, they are now slightly more skeptical -- but they have yet to settle (for long) on a more conservative alternative.

For the moment, surveys nationally and in Michigan are showing a plurality of the most conservative Republicans -- particularly those who identify as evangelical Protestants -- moving to Santorum. The question is whether that emerging consensus will persist any more than its recent flirtations with Gingrich.

On Sunday, via Twitter, New York Times reporter John Harwood quoted an unnamed Romney "senior aide" saying "we have to win both" -- referencing the upcoming Michigan and Arizona primaries. Given the consistency of the polling and Michigan's importance to the Romney campaign, it is likely the campaign will bring the same volume of resources to bear there as it did in Florida and Iowa.

Santorum's ability to remain competitive in Michigan may depend on two things: Whether his campaign has the financial resources to compete with Romney and his allies on the Michigan airwaves, and whether Santorum's current backers stick with him in the face of likely attacks.

For the moment, Santorum has a bit of an advantage: Conservative Republicans like him more than Romney. His overall favorable rating, as measured by PPP, is 67 percent -- and is much higher among Tea Party supporters (82 percent) and self-identified strong conservatives (78 percent). Romney's rating is lower on the PPP Michigan poll (49 percent overall) and not significantly different among conservatives (51 percent) and Tea Party supporters (48 percent).

But with the Michigan primary still two weeks away, the volatility in Republican horse race polling so far leads to one inescapable conclusion: Santorum may lead now, but the polling may look very different by election day.