This story first appeared in the June 3, 2013 issue of Michigan Nightlight.

Can quality preschool learning for Michigan children be tied to a healthy economy? Early education proponents around the state believe it can. Michigan Nightlight’s Amy Kuras talks to the experts.

From an adult perspective, it doesn’t look like much “real” learning is happening in a preschool classroom. Singing, coloring, and cutting with scissors are part of the mix, and maybe a dress-up corner, but it’s not what we think of as “school” when we’re older. But that’s a mistaken idea, say early childhood experts, and a dangerous one when it’s used to justify underfunding preschool programs. In fact, several studies have shown preschool is associated with higher earnings, employability, and less crime compared to kids who did not go to preschool. And when more people are contributing to the tax base and not consuming resources through the criminal justice or welfare systems, more tax revenue is available for other public needs. “There is a benefit spillover that affects the tax price at which I can get government services,” says Dr. Timothy Bartik, senior economist at the Upjohn Institute and author of Investing In Kids: Early Childhood Programs and Local Economic Development, a book that looks at the economic effects of preschool education. One study, by Wilder Research of St. Paul, Minnesota (and funded by the Max M. and Marjorie S. Fisher Foundation) found that investing in kindergarten readiness in just one more child in the city of Detroit would have a return of $100,000 savings over the life of that child, from increased tax revenue to savings on programs like remedial education and criminal justice. “If that was your return on investment, you’d be putting a dollar toward that every day,” says Cynthia Rowell, program manager for the Fisher Foundation. One of the most interesting and long-term studies of the economic effects of preschool readiness comes from Ypsilanti’s HighScope Educational Research Foundation.

HighScope’s Perry Preschool began more than 40 years ago as a demonstration preschool for low-income children ages three and four, designed to show the effects of a quality preschool program on at-risk children.

The first cohort of children studied were either placed in the Perry Preschool, with a high-quality, research-based curriculum, or did not attend the Perry program. Researchers for the foundation have studied that inaugural group of three- and four-year olds into their 40s. The most recent study, published in 2004, found some profound effects of that early learning experience when compared with the group that did not attend preschool.

The adults who had attended preschool as children also outperformed the control group on various intellectual and language tests during their early childhood years, on school achievement tests between ages 9 and 14, and on literacy tests at ages 19 and 27.

Perry Preschool was aimed at bettering the chances of the children who attended. All of the children began with lower-than-average IQs and were being raised in poverty; however, the preschool group had considerably better life outcomes. “High quality preschool is a specific example of how disparities in income and resources translate pretty straightforwardly into disparities in school,” says Larry Schweinhart, president of HighScope. “We’re all caught in up being mystified about what to do with it, but we can stop it before it starts. If you have a high quality preschool you can prevent that sort of thing.” 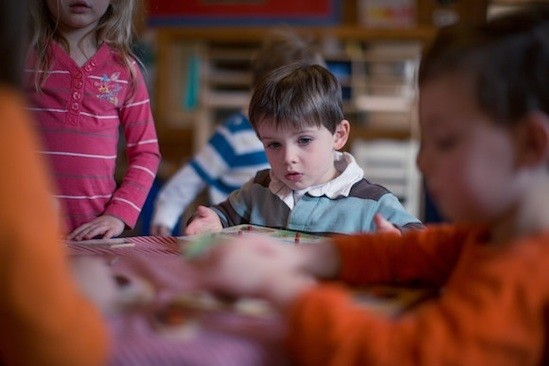 Kalamazoo County Ready 4S. Photograph by Adam Bird. Economic benefits of preschool go beyond just higher tax revenues and savings on social spending, Bartik says. There’s a degree of skill spillover in the labor market – even if a person is very skilled. If their coworkers are not as skilled, employers won’t be able to introduce as much technology or be as productive, which will hold down wages for everyone. “If all workers where I work are skilled, and if our suppliers are more skilled and we have more skilled workers, I can provide a higher quality product and it will increase the competiveness and profitability of my employer,” Bartik says. That’s pretty serious stuff for a curriculum that typically involves concepts as simple as colors and shapes. However, in many ways the benefits of preschool are not so much in the learning, although starting kindergarten with a knowledge of basics is important. Instead, it’s the social skills of working in a group, listening to adults in authority, and generally having broader experiences than are available at home that sets the trajectory for success in kindergarten and beyond. “Kids are going to have to learn how to navigate that -- that’s what school is,” Bartik says. “It’s not that parenting is unimportant, but what preschool does compliments what good parents do.” Earnings and employment, adds Schweinhart, are related to the type of social and motivational skills that start in early childhood. School reinforces those positive habits that over time can have big effects. The key is not just preschool, but quality preschool. Ferreting that out can be a challenge – while standards of quality are pretty well agreed on, not every childcare center meets them. Licensing standards speak to health and safety, but not so much to the quality of education offered at a center. In the interests of helping a parent find quality programs, a coalition of stakeholders in early childhood education have teamed up with Michigan’s Great Start Readiness Program to implement Great Start to Quality, a quality rating and improvement system that evaluates programs on a variety of standards and issues a star rating. Great Start is also working with childcare centers to help improve training of staff. The goal is that directors should have at least a bachelor’s degree in early childhood education and that staff members have an associate’s degree or a child development associate credential. That commitment to quality becomes more important as both the Obama administration and, in Michigan, the Snyder administration call for universal preschool for four-year-olds, Bartik says. “Certainly, I think if public dollars are involved, there should be accountability for quality,” Bartik says. “Some of this is funding. It’s a little unrealistic to expect high quality if the funding per child is insufficient to attract a high-quality teacher.” It’s also important to make sure lower-income children, who are at a disadvantage compared to children from higher-income families, get the same quality as a way to level the playing field. Bartik calls for mixed classrooms, with children of high-, middle- and low-income families all in the same classroom versus the income-segregated model of Head Start. Both Bartik and Schweinhart point to the benefits of high-quality preschool as a moral issue – a way to redress inequities that children live with through no fault of their own. “As a moral argument, it’s just wrong to have people who have dramatically different levels of life chances in a country founded on equal opportunity,” Schweinhart says. “Early childhood education is at the heart of that, and it’s a good place to focus on.”