I received an email today from the governor. Rick Snyder proudly announced that a Michigan-based company has decided to move to -- Michigan, of all paces. There it was, right there in my inbox, under the double-meaning title: "This is what it's all about." subject heading... 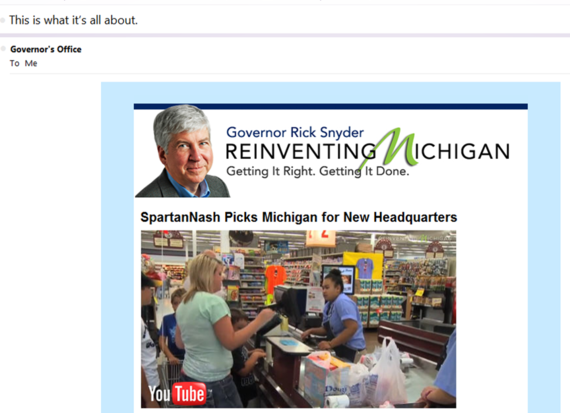 This is what it's all about. Yesterday was the one-year anniversary of the Michigan's governor signing into law "Right to Work" under the promises that it would make Michigan more competitive, attract new companies and give employees more options.

Despite all the evidence to the contrary, that all of the RTW states' employees have a lower standard of living without unions, despite the governor himself stating that the issue was divisive, despite the doors being locked from the public during the lame-duck push by legislators who had just lost their seats in the election the law was passed.

Yesterday, the AFL-CIO sent out an email reminding Michigan of the governor's broken promise. It was probably this email that prompted the governor's own response this morning:

We haven't seen the job growth that was used as a pretext to pass this controversial legislation. In fact, unemployment is higher than it was a year ago and the governor cannot name one company moving to Michigan because of his actions. (AFL-CIO source)

In a "gotcha" moment, Governor Snyder sent out his email stating:

The governor does not state in this email that SpartanNash is a merger announced last July between Spartan stores of Michigan and Nash-Finch stores of Minnesota. Also, Spartan is the primary shareholder:

What the governor meant to say was that one of Michigan's companies now owns more stores in other states.

So according to the AFL-CIO jobs are down. According to Governor Snyder's emails quoting a University of Michigan study that is not referenced, jobs are up. Neither side is listing their sources, unfortunately.

And is it really reinventing Michigan? After all, the Big Three automakers got to where they are by doing the same thing that Spartan Stores just did -- bought out the struggling little guys. Even just a few decades ago, the Big Four was around, until Chrysler took over American Motors.

At least in the video link, they do admit that SpartanNash isn't a new company, but is instead a merger through the talking head interview with CFO David Staples, who, according to the email, could have moved to any state but chose Michigan (where he was living all along anyway).

As a teacher of video productions, I'm cursed to always be picking apart infomercials like this one. And I can't get past the b-roll video of the checkout aisle while Mr. Staples covers all of Governor Snyder's talking points (lower taxes, great opportunities, exciting times, terrific House and Senate, lower taxes II). It's probably good to remove the tabloid with "Cher's Sex Cult Scandal" headline if you're trying to drive home a wholesome image. And for heaven's sake, don't use that same b-roll twice!

And the Snyder Infomercial moment is stated by Mr. Staples at 1:11 in the video:

"It's not just been revenue, it's also been cost-control and that's really resulted in a tax environment that we think is much more favorable than a number of our neighboring states."

...since most of those neighboring states are not Right to Work.

But to be fair, perhaps the workers at the Nash stores in Minnesota will get the better side of the deal. Glassdoor.com is a website that not only posts jobs but allows employees and interviewees to post their pros and cons. The two merging companies seem to have very different management styles:

While Spartan (above) gets very favorable reviews, particularly for a supermarket chain, the newly adopted Nash-Finch goes in the other direction..

Comparing the employees' very different reviews of their bosses, working conditions and most notably the disparity between the two CEOs it will be interesting to see in what direction the new management decides to take its employees. Considering the CFO's endorsement of the House and Senate, it might be a safe bet that Spartan's overall satisfaction might be drifting down toward Nash-ville.

I'd like to be optimistic, that good times are right around the corner, that 20+ Minnesota axe-grinders might be pushing the reviews south unfavorably. But the timing of Snyder's e-blast following the AFL-CIO's yesterday along with the refusal to use either of the following phrases in the email: "merging companies" or "staying in Michigan" leads me to think otherwise.