Today is National Coming Out Day. But if you work in Michigan, you may want to think twice about coming out at your workplace.

That's because Michigan is among 29 states in the union where you can still be fired on the spot just for being gay, or 35 states if you're transgender. While employment laws exist on the books to protect workers on the basis of race, gender and religion, no such protections exist for employees who are singled out for their sexual orientation and gender identity.

That means you can be fired if your boss (who doesn't like gay people) overhears water cooler chat about your weekend and who you spent it with. You could be canned if she draws conclusions about your personal life from Facebook, or if she objects to the color of your shirt or music preferences.

In other words, the problem goes beyond your sexual orientation or gender identity. If you're even perceived as being gay, you could be out of a job.

If you're reading this and thinking to yourself, "Really? That's nuts," well, you'd be right.

It gets worse: last week Michigan legislators introduced a bill that would make it unlawful for cities, school districts and other units of government to take steps to protect our gay, transgender and not-gay neighbors.

This preemptive strike against the civil rights of gay and transgender people comes on the heels of a recent controversy over an Android app that claimed to help parents answer the question, "Is my son gay?" with the aid of 20 questions that probe whether he likes musical comedies or spends a "long time in the bathroom."

Google rightly killed the app following a firestorm of criticism, but not before the incident made clear that stereotypes about gay people are alive and well.

The real dangers of such stereotypical perceptions and the legislative attack on civil rights are at the forefront of a new statewide public education campaign, "Don't Change Yourself. Change the Law," launched by a coalition of civil rights groups in Michigan today in honor of National Coming Out Day.

We decided that if stereotypes of gay people can be used against all of us -- gay or straight -- then what better way to make our point than by turning these stereotypes on their heads? 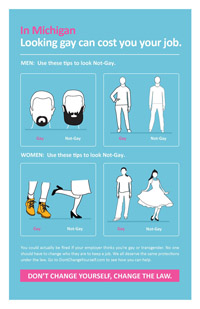 The centerpiece of the campaign is a tongue-in-cheek guide, How to Look Not-Gay to protect yourself from workplace discrimination. The key? Drape yourself and your work station in the trappings of hyper-heterosexuality. Replace your current screen saver with a photo of a monster truck for the guys, or kittens for the ladies. Download instructional posters that offer guidelines on everything from facial grooming and shoe-wear to look "Not-Gay."

Behind all this satire, of course, is a serious point: looking gay can cost you your job -- and that's outrageous. We need to change our laws so that there are equal rights protections in the workplace for all Michiganders, including lesbian, gay, bisexual and transgender people. With efforts to pass federal legislation stalled in the Republican-controlled Congress, it's more important than ever for Michiganders to insist on fairness in their own state and cities.

Most Americans are on the side of fairness on this issue. National public opinion research shows that 73 percent support workplace and employment equality. A full 65 percent of Michiganders favor such protections. It is our legislators who are out of touch.

With jobless rates at 11 percent in Michigan -- slightly above the national average -- none of us should have to live under the threat that we could lose our job just for saying or doing something some supervisor thinks is a little too gay, or gay at all. All hardworking people should have the same chance to do their job well, earn a paycheck and provide for their families. End of story.

History -- and time -- is on our side. Earlier this summer, a measure in conservative-leaning Holland, Mich. that would have prohibited employment discrimination against people on the basis of their sexual orientation and gender identity narrowly failed by just one vote in the city council. The temporary setback has created new energy and dedication by the people of Holland to overcome one out-of-touch vote, and when given the chance to vote in an August primary for a pro-ordinance candidate or an anti-ordinance candidate, the voters overwhelmingly chose the pro-ordinance candidate.

Other politicians take note: nondiscrimination is a winning issue.

The Fair Employment Practices Act, designed to make sure job-seekers -- regardless of race, color, religion or national origin -- got a fair shot at employment, was put on the books when Eisenhower was in the White House. Michiganders have continually valued equality in the workplace, since the Flint Sit-Down Strike in the 1930s defined the fight for labor equality. Safeguarding gay and transgender workers from workplace discrimination would be in keeping with Michigan's long and proud history of civil rights protections.

If you're great at your job, you shouldn't have to change anything about yourself to keep it. What really needs to change is the law.