Mickey Kaus took some time off from being the a capella singing lawyer on the canceled sitcom Scrubs to attend a "debate" between himself and Senator Barbara Boxer (D-Calif.), whom he is pretending to run against for the Democratic nomination for the California Senate. Boxer, as you might expect, did not show up for this event -- which was staged at a Holiday Inn in San Francisco -- so she was replaced at the lectern reserved for her by a cardboard box. I imagine he held his own against the cardboard box, as he explained how his proposed Senate Select Subcommittee On Belittling Ezra Klein will solve the California State budget crisis.

Anyway, his brother snapped some pictures of this for Kaus's scrapbook. And that's the story of the historic Kaus-Some Box Debates of 2010. 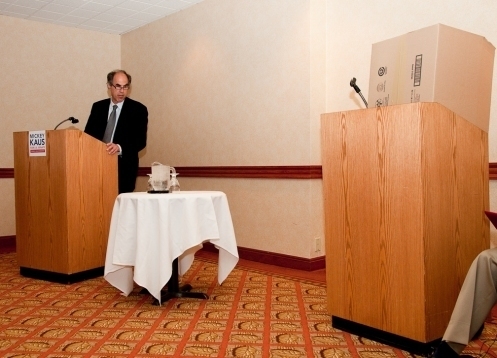