It's no secret that Mickey Rourke has had plastic surgery, and bad plastic surgery at that. The actor once claimed that he went to the wrong man to put his face back together, and he has continued to try to correct the 2008 hatchet job ever since.

Photos taken last year show "The Wrestler" star's latest journey under the knife, and the 60-year-old actor looks more like he took a beating than he's in post-surgery recovery. The photos were obtained by the National Enquirer, and show Rourke looking monster-like with his swollen face, bruised eyes and bandaged head -- it's hard to believe a person would voluntarily do this to themselves.

The actor famously underwent surgery in attempt to regain his once-handsome looks, which he lost when he became a professional boxer in 1991 after his career in Hollywood fizzled. Rourke returned to acting after he was advised to stop boxing due to neurological problems.

"I had my nose broken twice. I had five operations on my nose and one on a smashed cheekbone. I had to have cartilage taken from my ear to rebuild my nose and a couple of operations to scrape out the cartilage because the scar tissue wasn't healing properly. That was one of the most painful operations, but the worst was hemorrhoids," he told The Daily Mail in 2009, adding that "Most of [the surgery] was to mend the mess of my face because of the boxing, but I went to the wrong guy to put my face back together,' he says. 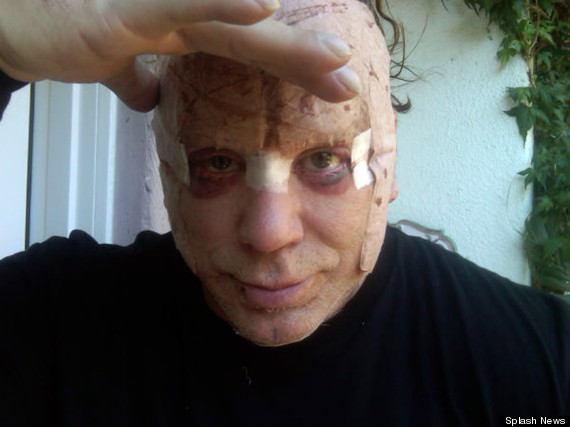