Microbeads might work to scrub us clean, but the tiny pieces of plastic found in some face wash, soap and toothpaste products can wreak havoc on coral, new research suggests.

Researchers with the Australian Research Council Centre of Excellence for Coral Reef Studies at James Cook University have found that coral, which don't discern food from tiny pieces of garbage, eat microplastic pollution at rates only slightly lower than their normal rate of feeding on marine plankton. The plastic then gums up the coral's digestive systems, they discovered, suggesting that microplastics could effectively starve coral by preventing proper digestion of real food.

Because microplastics are so small, they often float from our drains through filtration systems and into the ocean, where they resemble zooplankton, sediment and other microscopic organisms -- in other words, coral and fish food. Researchers have previously found microplastics in fish caught for consumption in the Great Lakes, and scientists suggest plastic debris could easily make its way into the intestines of fish-eating humans.

In a statement, Mia Hoogenboom, a chief investigator with the Australian Research Council, called marine plastic pollution "a global problem" and said that "microplastics can have negative effects on the health of marine organisms,” especially coral.

"If microplastic pollution increases on the Great Barrier Reef," she said, "corals could be negatively affected as their tiny stomach-cavities become full of indigestible plastic."

See the striking difference between a photo of a sick specimen of Acropora hyacinthus coral and what it looks like when healthy: 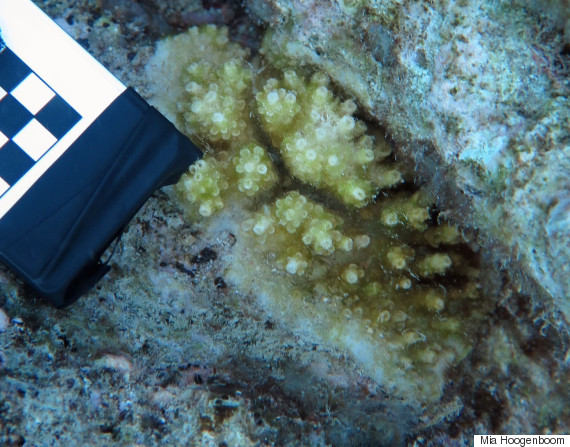 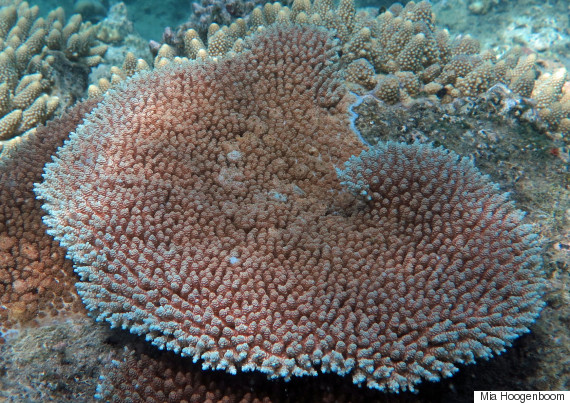 Hoogenboom's study was recently published in the March, 2015, issue of the Journal of Marine Biology. By placing specimens sampled from Australia’s Great Barrier Reef into water polluted with plastic, the researchers found that coral ingested the plastic after just two nights. The plastic was then found deep inside the coral digestive tissue, raising concerns that it might impede the coral's ability to digest normal food.

The researchers will next look at whether fish on coral reefs eat plastics, and how extensively and negatively these organisms, including coral, might be impacted.

Some states have already taken steps to ban the sale of personal care products containing microplastics, and major brands like Procter & Gamble, Johnson & Johnson, Unilever and L'Oreal have announced they will phase out production of products that use plastic microbeads. 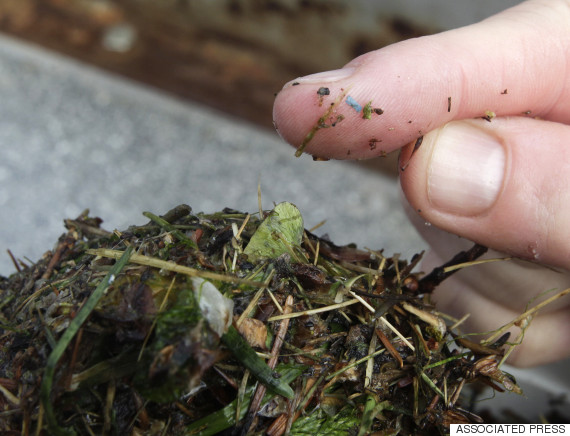 In this file photo, a tiny blue piece of microplastic is seen on a finger, found in 2010 in the Thea Foss Waterway, in Tacoma, Washington.

Unfortunately, manufactured microbeads aren't the only culprit. The National Oceanic and Atmospheric Administration notes that as regular plastic pollution breaks down in the ocean, it turns into microplastic debris (defined as anything less than 5 mm in size). No one really knows how long plastic stays in the ocean, but the Ocean Conservancy estimates that some debris can take 450 years to degrade.

In other words, it's only a matter of time until larger pieces are broken down enough to be classified as microplastics, and they remains a threat to coral and other fish even in minuscule pieces.

You can do your part by purchasing only personal care products that don’t include polyethylene and polypropylene. Instead, exfoliate your skin with all-natural substitutes, such as coffee grounds, rice or sea salt.

Clarification: This article initially included Colgate among the brands that are in the process of removing microbeads from their products. According to a company statement, Colgate Palmolive had removed the ingredient by the end of 2014.