I just heard a story in the news about a family who had lost their dog. They did everything to find him -- putting up posters, checking shelters -- nothing. Then, after two years, they get a phone call. Their dog was found. The person who found the dog took him to be scanned for a microchip and it showed who his family was and they were reunited. 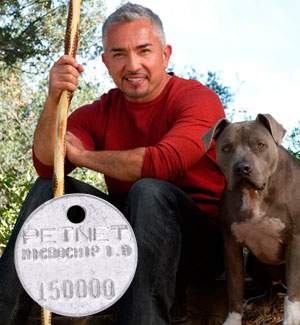 The chip's only as big as a grain of rice. It's usually implanted in the scruff of your dog's neck and doesn't cause any pain for your pet. And it only costs around $25 to $50, depending on your vet.

I think it's so much safer than other forms of identification. If your dog gets lost, he might lose his collar and tags; if your dog is stolen, the thief might remove his collar and tags. With a microchip, you can help people who find your dog find you and if someone else says it's their dog, you can prove it's yours.

They make some neat stuff that works with your dog's microchip, too. Like a pet door that recognizes your dog's chip and lets him into the house (but not the raccoon that comes by later). The microchip won't track your dog, though. Your dog has to be taken somewhere to be scanned.

To me, the decision whether to microchip your dog or not is an easy one. You should microchip your dog as soon as possible, and you'll rest easier knowing that if anything happens to your dog, you'll have a better chance of recovering him.

Many communities are proposing making microchipping all dogs mandatory. Just last month, Northern Ireland began requiring all of its dogs to be microchipped. Besides finding your dog, there are two good reasons to make microchips mandatory -- although it saddens me that there are still these problems at all.

The first reason is that many dogs aren't really lost -- they're abandoned. People get a dog and decide they don't want the dog anymore and then they take the dog somewhere and just leave it. And if they remember to take off the collar and tags, no one would know. If that dog had been microchipped, it could be traced back to the owner

Everyone knows how strongly I feel about the exploding stray problem. Microchipping dogs wouldn't solve the problem completely. But if everyone spayed and neutered their dogs and microchipped them, it would make a huge dent in the stray population. Microchips would reunite lost and runaway dogs with their families, and the owners who abandon their dogs might think twice about dumping their dog in the country or on the streets if they knew there were consequences like fines or jail.

The second reason deals with a subject that always makes my blood boil. The people who buy dogs to use as weapons. They train these poor dogs using incredibly cruel techniques to turn them into vicious killing machines. If the dog was microchipped, just like a gun with a serial number, it could be traced back to the owner, who would then have to answer for any offense that the dog may have committed.

Whether the microchip is ultimately used to reunite a family with a missing pet or to deter criminals from victimizing dogs or using them to victimize others, it's hard to say that mandatory microchipping wouldn't be a useful thing. It would reduce strays, euthanasia rates and shelter crowding -- all problems that are only getting worse.

I know some might say that it's not the government's place to mandate the microchipping but, you know, every car has to have a vehicle identification number and a license plate and every gun has to be registered to its owner. And for a dog lover, a dog is vastly more valuable than a car, and in the wrong hands, a dog can be more dangerous than a gun.

Please have your dog microchipped. You'll never regret doing it, but if your dog gets lost, you'll always regret that you didn't.