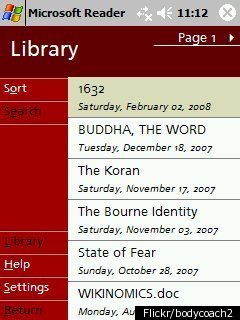 Microsoft has announced today that it will be ending its e-reader software, called Microsoft Reader, 11 years after it was originally released. First launched on handheld computers known as the Pocket PC, versions were later released for desktop computers and Windows Mobile cell phones.

"a Microsoft innovation that greatly improves font resolution on LCD screens for users of desktop or laptop PCs running the Windows operating system as well as dedicated reading devices.

"In addition to incorporating the latest ClearType technology, Microsoft Reader strictly adheres to the traditions and benefits of fine typography. It provides a clean, uncluttered display; ample margins; full justification; proper spacing, leading and kerning; and powerful tools for bookmarking, highlighting and annotation. Microsoft Reader also includes a dictionary as well as a library that can store and manage a large collection of books and other documents."

In other words, many of the features of current e-book software.

More than 30 mostly academic publishers were reported to have signed up to publish books in the format on its launch, with ebooks originally sold via the Barnes and Noble website.

The software used a proprietary file format, .lit, for its books, and Microsoft created special add-ons to allow Microsoft Word users to save their files in the .lit format. However, according to a blogpost on x7 labs, the fate of Microsoft Reader "was closely tied into Microsoft's Tablet PC vision, which steadfastly refused to generate sales."

No version of Microsoft Reader was ever released publicly for the current Windows Phone operating system, while Kindle and Kobo-compatible e-reader apps, among others, are currently available for phones that run Windows Phone 7.

Did you ever use a Microsoft Reader? What did you think? Let us know in the comments!