Microsoft CEO Steve Ballmer took a jab at Apple from the stage at the Wall Street Journal's All Things Digital (D) conference Thursday morning where co-host Walter Mossberg asked him about how he's dealing with his new-found competition based on the early success of Apple's iPad. 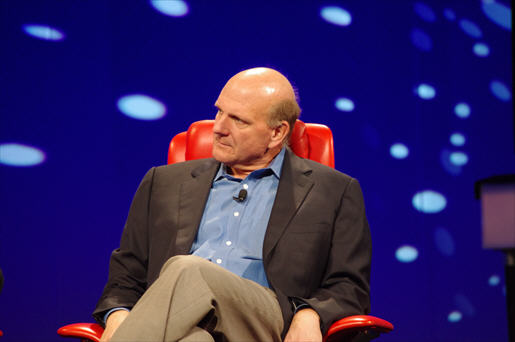 Microsoft CEO at All Things Digital (photo by Larry Magid)

"There may be a reason they call them 'Mac trucks' but Windows machines won't be trucks." Ballmer was referring to Apple CEO Steve Jobs' analogy from his talk at D where he likened PCs (and Macs) to "trucks" that were wildly popular during agrarian times but are now niche products."

"I think people are going to be using PCs in greater and greater numbers for many years to come," he said but "PCs will look different next year and the year after. They'll get smaller and lighter. Some will have keyboards and some won't Sometimes the user interface will look like your desktop but sometimes look like what we've done in Windows Media Center.'

"Nothing people do on a PC is going to get less relevant tomorrow," he added. "There will exist a general purpose device to do everything you want. The PC as we know it will continue to morph form factors. The real question is what you do with it."

He said that that the iPad is simply a new PC form factor, not necessarily a new category of devices. When referring to Jobs' enthusiasm for his new device, "To a man with a hammer everything looks like a nail."

Ballmer pledged that Microsoft would develop software for "a range of devices over time that are light and don't have a keyboard and that run Windows."

One big advantage of the iPad over Windows machines is that the iPad gets about 10 hours of battery life between charges. It's rare for Windows devices to run for more than three hours on a charge. Part of the problem is with the hardware but software is also a major issue.

Mossberg also asked Ballmer about cloud computing which is a major thrust for Microsoft and other software companies (Microsoft is about to release a "cloud" version of Microsoft Office that runs on the web). Ballmer said that cloud computing will not necessarily usher in lower power devices. "The experiences people want will almost always have a relatively smart processor with a reasonable amount of storage and reasonably good graphics. It's all about getting smarter on the client. By client he was referring to PCs, tablets and phones.

And will all this be a threat to Microsoft? "Well," responded Ballmer, "there is nothing bad for us in the trend. It's all good but it's a transition. Transitions are times of potential tumult. Is it a time we need to work harder work smarter, be more vigilant. We're moving from a world that's fundamentally good for us to a world that's even better for us."

Takes One to Know One

It might be better but it's also more crowded, especially with Google's major commitment to be a major player in cloud computing.

And what does Ballmer think of Google? "It's a very large behemoth ... but it takes one to know one."