When Microsoft showed HoloLens at TED in Vancouver, its presentation was dramatic and impressive. I wasn't sure why, but the TED crowd of techno early adopters and thought leaders seemed less than impressed. The augmented reality glasses promised to place holograms on top of the real world. 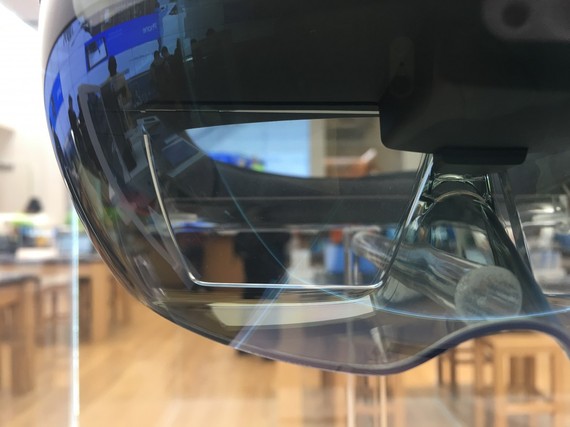 But after the demo, the TED Host Helen Walters asked Alex Kipman about the criticism that HoloLen's field of vision was narrow and limited. Kipman didn't answer the question, and you could feel the room shift uncomfortably.

So, when I was invited to try the HoloLens for myself, I jumped at the chance. Augmented Reality is a new, red-hot field - and Microsoft has the resources and the intellectual firepower to do something great - at least that's what I thought.

I arrived on time at the Microsoft store on 5th Avenue in Manhattan. Once inside, I was directed to the 4th floor. Immediately, I was surprised. The temporary demo space wasn't glamorous, or hip or crisply designed. Maybe all the resources went into the hardware and the demos - but it felt more like office cubicles than a high-tech product launch.

I was shown a demo on how to put on HoloLens, and the three ways you could communicate with the device. Eye gaze, touch, and voice - the video presentation explained. I could look to move the 'pointer' within the 3d space, I could use my finger to 'click' when directed, and I could answer questions with voice. Ok, I can do that. Then I was asked if I knew my IPD, which it was explained, my optometrists would have told me. Inter-pupillary distance (IPD) is the distance between the eyes. I did not - do you? In any case, they measured my IPD and I was given a card with the number on it. Mine is 63. 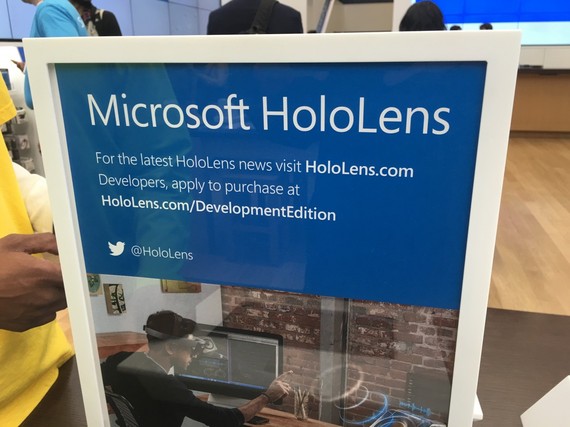 I did three different HoloLens demos. The first was 3D design, where I manipulated a 3D sign, changed its colors, and then was able to see the final result as a 3D print out. Inside the HoloLens - the experience doesn't feel immersive, but rather flat. Unlike my experience with the Meta2 glasses that I'd written about earlier, the HoloLens experience feels more like seeing through a letterbox video monitor. The holograms seem like they're pasted over the real world than as an extension of it. And while I was told I could manipulate the holograms with my hands, the only way I used my hands was with a stiff right pointer finger and a rather determined clicking motion. More often than not, the HoloLens didn't recognize my gestures - and it took try after try to 'click' on the imaginary image.

The second demo was called storytelling, but really it was augmented reality advertising. I was able to experience a high-end wristwatch, and explore it - but again the experience was cramped and formal. Not fluid and exciting as it was in the Meta2 glasses.

Finally - the last demo was gaming. I was attacked by evil robots - and using a device they gave me to hold in my right hand - I clicked to fire lasers at them. This was fun - and having them come from around the room was exciting. I'm not sure how a true gamer would feel about the HoloLens experience, but I suspect it looks a little like the first generation of pong does compared to where video games are now. Which is to say - simplistic, flat, and frankly not really that much of the holographic experience that I was expecting. The cropped video frame made it hard to forget that the projections were just that.

So, no surprise then that Microsoft didn't let me photograph or record any of the demo space or the experience itself. And while the HoloLens is on display on the floor of the Microsoft store, it's in a sealed plexiglass cube - to be seen but not touched.

I'm excited about augmented reality. And I've yet to see what Magic Leap is building, so there's still an unknown player in the space. But up until now, my experience with Meta2 is far and away the winner - an experience I found truly immersive and awesome.