So I have a question for everyone who is middle-aged, single and dating. Just when was it that sexting after the first date became the new normal? At what point in our cultural evolution did it become normative practice to send a text the night after a first date, with the words "nipple" and "naked" in it? I'd really like to know the answer to this question. I am just burning with curiosity as to how this new dating ritual became mainstream so quickly.

I'd really like to know what middle-aged person was actually the first one to say "Hey, I think this is a really good idea. I mean, we've already shared a few glasses of wine and an appetizer, so why not indulge in some dirty sex talk with a naked photo chaser exchanged on our smart phones via an insecure wireless transport?" And then once all these middle-aged men and women who are engaging in the practice of early-courtship-sexting answer me, I'd like to say this in response: "Stop it! Stop it right now! All of you! I mean it! Stop it!"

When I first re-entered the dating world a little over a year ago after taking a few decade hiatus to raise my son, I expected to update my "rules for the dating road" handbook. But what I didn't expect was for so many of my dates to turn a seemingly harmless morning-after-the-first-date texting banter session into a graphic sexual encounter. Yet at least twice this month alone I had really nice dates with seemingly nice mainstream, professional men that quickly went south when initially cutesie, fun, and banter-y texting rapidly evolved into full-blown erotica before the second date!

In fact, I'm certain that a few dates didn't lead to second ones because I didn't indulge. And by "didn't indulge" I don't mean that I cursed at these men, called them pigs, and threatened to call their mothers. No, what I did was to respond with an innocuous "LOL" and perhaps a wink emoticon, and then gently changed the subject.

I must admit that on one occasion I almost succumbed. I really liked this man and wanted to see him again, so I actually pondered complying with his request for a wet t-shirt selfie a few days after our first date. But what tempted me to almost jump off the sexting bridge weren't solely his good looks, charm and allure; rather, it was his assertion that I was "soooo conservative," and that I was the "only woman" he'd met who didn't immediately indulge in a frenzied sexting mêlée after the first date. So yes, this 54-year old woman who has been dating for upwards of 40 years, and who has multiple advanced degrees, and writes about self-esteem and the importance of standing firm, almost leapt on the sexting bandwagon because of peer pressure. Yep, for just a moment I thought "uh oh, am I really the only one? Really??"

Here's the issue I have with sexting - actually, there are several. First, it's never a good idea to have naughty self-authored stories and naked photos of oneself floating around in cyberspace where anyone from the NSA to our bosses, to our neighbors and maybe even our kids can find them. And if you don't think that's a realistic concern, think again. When was the last time you checked to see if your photo stream was on? I for one am constantly toggling this smart phone feature for one reason or another, which means that many photos on my iPhone could at any time pop up on any of my other devices, scarring any number of people, potentially for life.

Also, this 50-year old-plus body is not what it used to be, despite a pretty rigorous yoga regimen. I have cellulite, and the thought of having naked photos of me posted on some revenge porn website with untoned arms and orange-peel thighs is horrifying, simply horrifying. In fact, this fear alone is enough to keep me in check. And no, taking photos of myself with my head cut out of the picture won't help, because I'm assuming that if I know a man well enough to sext him (which according to contemporary dating guidelines means between 24 - 48 hours), then he will potentially have my contact information in his phone, so even if I've heeded the red danger lights flashing inside my head and snap the shot from the neck down, my full name will still be boldly announced at the top of the screen for all the world to see.

Now some of you (men) might be thinking "what about a little naughty talk? What's wrong with that?" Well, beyond the sheer awkwardness of entering into sext talk with a man I've set eyes on only once or twice, I'm simply a terrible storyteller. I know this may seem like an odd and rather surprising admission coming from a writer, but I write non-fiction, not fantasy, not romance, and certainly not erotica. On the one or two very rare occasions when I have attempted to cross the line from flirty banter to fantasy talk, I have failed miserably. I got nervous, and my mind went blank, which then turned into a nasty case of writer's block and the absolute most I could muster was an occasional "uh huh" or, "I guess so...alrighty then." Not really very sexy at all.

So going back to my original admonition, stop it -- all of you middle-aged, first-date sexters, just stop it. You're putting too much pressure on the rest of us out there who find no value and far too much risk in sexting, particularly after only one date. It's confusing enough out there with all the new rules ushered in with the era of online dating, and for many of us, we're still trying to catch up.

Now, I know that everyone has to make their own decision about this new trend in middle-aged dating, but with all new ventures involving a certain measure of risk, before jumping off the cliff, it's a really good idea to imagine the absolute worst case scenario and then ask yourself if you're okay with the outcomes. So stop what you're doing right now, and imagine yourself in the scenarios listed below:

How do these scenarios make you feel? Can you manage these risks? Do you even want to? And what are the benefits of sexting to you? Do these benefits outweigh the potential risks? If not, then my advice to you is stop it. All of you middle-aged, first-date sexters, stop it!

PHOTO GALLERY
New Rules for Love and Dating Over 50 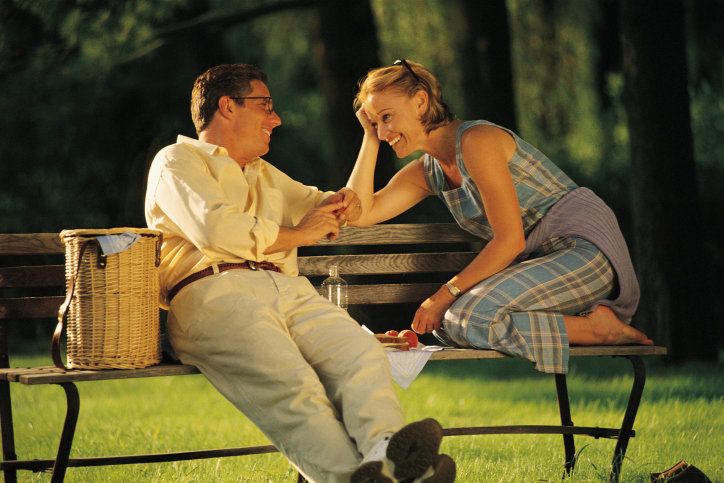 1 / 12
Don't Get Too Enchanted With Your Own Drama/Story
Make a life spreadsheet to simply deal with problems as the inevitability they are. Don't allow them to be an excuse not to fully commit to what you are creating with your potential partner now.