A new rule just announced by the Obama administration will, effective December 1, double the overtime-pay salary threshold and set it to automatically increase every three years. It's about time.

The salary of employees has been diminishing since the 1970s, as a share of the economic pie, believe it or not. While the profits of businesses are at record highs, as a percentage of GDP.

The high point of employee earnings was 50.1 percent of Gross Domestic Income in 1970, a proxy for Gross Domestic Product, and the current low point is 42.5 percent. 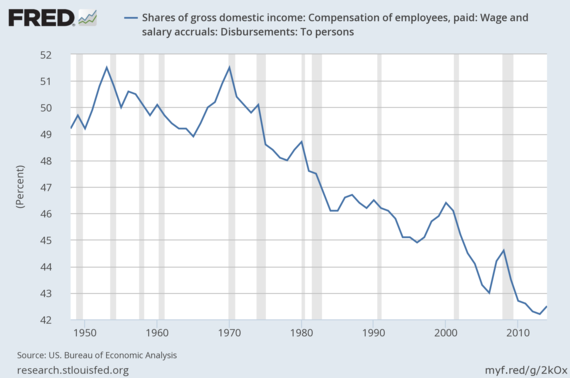 Why the discrepancy? It's complicated, but has resulted in the decline of middle class wealth--and so of the middle class itself. The Obama administration, thanks to Labor Secretary Thomas Perez, is set to correct the deficiency.

The Labor Department says about 4.2 million workers will gain overtime benefits as a result of the rule, though the labor think tank Economic Policy Institute, which has argued strongly in favor of the rule, says this is a major undercount. Up to 13.5 million employees could be affected.

Americans' paychecks have not kept pace with their productivity in part because millions of lower-middle-class and even middle-class workers are working overtime but not getting paid for it. President Obama directed the Labor Department to modernize the rules that require employers to pay workers time-and-a-half if they work overtime. The department issued a proposed rule to raise the overtime threshold from $455 per week, or $23,660 per year, to a "standard salary level equal to the 40th percentile of earnings for full-time salaried workers," which is $921 per week in 2013 dollars, or $933 per week adjusted to 2014 dollars.

Salaried workers whose earnings are $933 per week or more can be exempted from the right to receive overtime if they fall into one of three categories: professionals, administrators, and executives. Each of these exempt categories is defined by a set of duties showing that the exempt employee is skilled and exercises independent judgment, or is a boss with a department and employees to supervise.

Unfortunately this rule was ignored by the Bush administration when the overtime pay rule was last adjusted. The threshold was kept at $23,660 per year, and even those workers were required to work overtime, even though they had little or no management duties.

The result has been record corporate profits, and very low productivity improvements with little incentive for businesses to raise workers' wages or make investments that would create more jobs.

Why does private business have so little incentive to put some of their record profits to
productive use? Nobelist Joe Stiglitz and other economists have labeled it "Monopoly's New Era".

"Capitalists are rewarded for saving rather than consuming - for their abstinence, in the words of Nassau Senior, one of my predecessors in the Drummond Professorship of Political Economy at Oxford (in order to pass their wealth on to succeeding generations)...The second school of thought takes as its starting point "power," including the ability to exercise monopoly control or, in labor markets, to assert authority over workers."

In other words, Big Business in particular has since the 1970s focused on maximizing profits, not to create even more wealth for their employees or communities, but to pass it on to future generations. Economist Thomas Piketty has labeled it a return to Europe's Gilded Age when most of the wealth was inherited.

US President Barack Obama's Council of Economic Advisers, led by Jason Furman, has attempted to tally the extent of the increase in market concentration and some of its implications, says Stiglitz. In most industries, according to the CEA, standard metrics show large - and in some cases, dramatic - increases in market concentration. The top ten banks' share of the deposit market, for example, increased from about 20 percent to 50 percent in just 30 years, from 1980 to 2010. Hence the need for Dodd Frank to avoid any more 'too big to fail' scenarios. 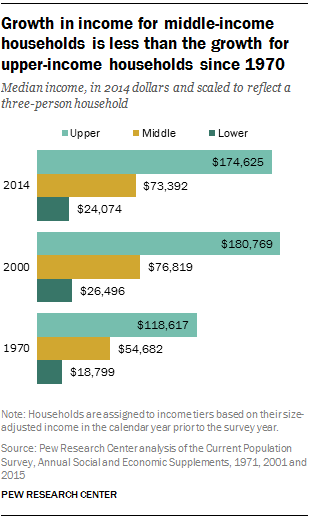 And the result is our middle class has shrunk, the class that earns the most and is the most productive in our society. After more than four decades of serving as the nation's economic majority, the American middle class is now matched in number by those in the economic tiers above and below it, reports a recent PEW Research study.

In early 2015, 120.8 million adults were in middle-income households, compared with 121.3 million in lower- and upper-income households combined, a demographic shift that could signal a tipping point, according to a new Pew Research Center analysis of government data.

So it's no surprise that economic growth has slowed. There are fewer households that tend to spend their earnings into the economy, which would generate the jobs and future economic growth. This is something the wealthiest do not do--they have other uses for their wealth.