The middle-class share of American wealth has been shrinking for the better part of three decades and recently fell to its lowest level since 1940, according to a new study by economists Emmanuel Saez of the University of California, Berkeley, and Gabriel Zucman of the London School of Economics.

In other words, remember the surge of the great American middle class after World War II? That's all gone, at least by one measure.

In this case, "middle class" is defined rather expansively as the bottom 90 percent of all Americans. "Wealth" is the total of home equity, stock and bond holdings, pension plans and other assets, minus debt. As such assets are mostly owned by mid- to higher-income households -- and considering most Americans define themselves as "middle-class" -- it seems reasonable to use the bottom 90 percent as a proxy for the "middle class."

Saez and Zucman discussed their paper in a blog post for the Washington Center For Equitable Growth on Monday that included this stark chart: 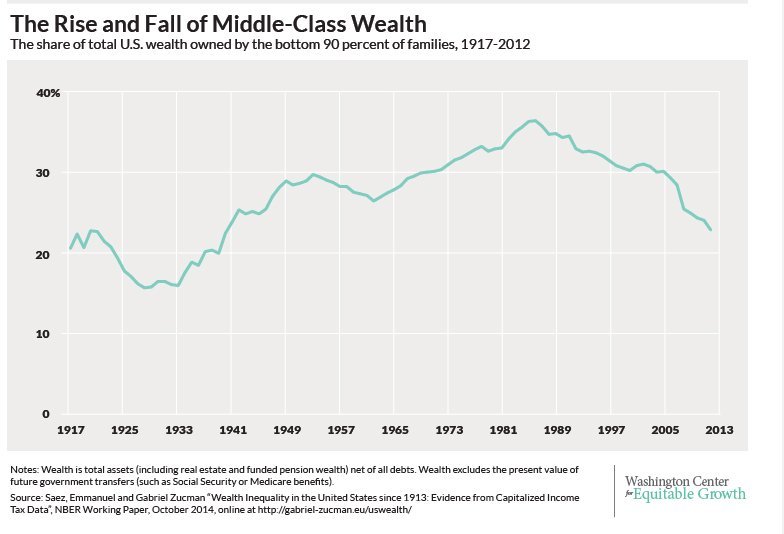 Debt has been the big force driving net wealth lower for the middle class, according to Saez and Zucman. Brief bubbles in stock and home prices in the 1990s and 2000s only temporarily offset the steady, depressing rise in mortgage, student-loan, credit-card and other debts for the bottom 90 percent.

"Many middle class families own homes and have pensions, but too many of these families also have much higher mortgages to repay and much higher consumer credit and student loans to service than before," Saez and Zucman wrote.

Another important factor has been that incomes have stagnated for most Americans over the past few decades, once adjusted for inflation. Along with rising debt levels, stagnant wages have made it impossible for most families to save very much money.

And who has been the beneficiary of this middle-class misery? The top 0.1 percent of Americans, whose incomes have just kept rising, and whose share of wealth has soared to levels not seen since Jay Gatsby was still staring at the blinking green light at the end of Daisy Buchanan's dock: 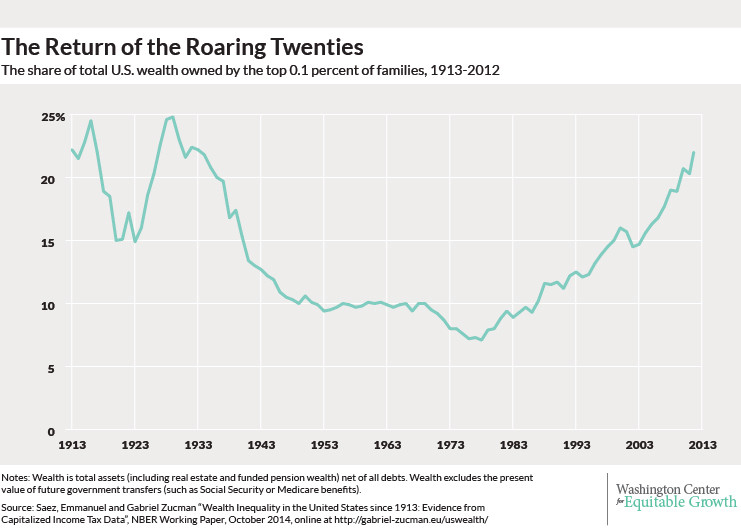 In fact, the middle class is not alone in suffering from shrinking wealth. The rest of the top 10 percent of Americans below the 0.1 percent -- the "merely rich," Saez and Zucman call them -- have also suffered from falling household wealth over the past four decades.

This rising inequality of wealth can only lead to more inequality of income and wealth in the future, Saez and Zucman warned, echoing French economist Thomas Piketty. The very rich will just keep getting richer by living on the returns from their wealth, while the rest of us will keep falling behind.