An average of 70 percent of people living in six Arab countries said in a recently released study that they're in favor of censoring entertainment programs.

Northwestern University in Qatar, in partnership with the Doha Film Institute, interviewed more than 6,000 citizens and expatriates in Egypt, Lebanon, Qatar, Saudi Arabia, Tunisia and the United Arab Emirates about their media consumption and attitudes toward entertainment. An average of seven in 10 respondents said they believe that violent and romantic content should be more heavily regulated and that "some scenes should be deleted, or whole programs banned, if some people find them offensive." 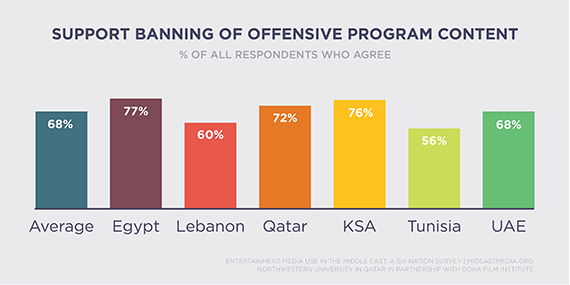 Despite this conservative outlook, Hollywood movies are surprisingly popular in the countries surveyed. 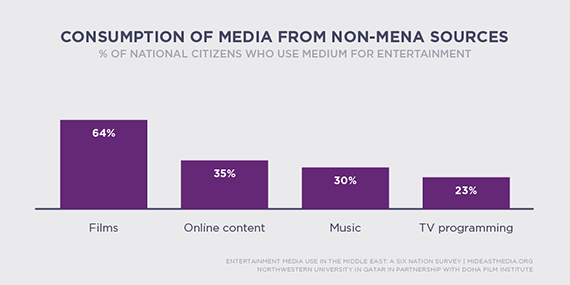 *MENA refers to the Middle East and North Africa.

Citizens of the Arab nations in the study aren't necessarily proud of these viewing habits. Sixty-nine percent said that movies from the Arab world are "good for morality," but a meager 15 percent felt the same about Hollywood movies. Forty-three percent of citizens said that Hollywood movies are "harmful for morality." European films were regarded as even more morally suspect.

Hollywood and other international shows and movies "might be considered 'guilty pleasures' that are enjoyed by many respondents despite the fact that many feel they are harmful," the survey authors wrote.

The survey also found that the region is afflicted by another guilty pleasure -- binge watching. Four in 10 respondents admitted to TV binge watching, defined by the study authors as viewing two or more television episodes in one sitting.