Lady Gaga was the biggest pop star in the world. And not just circa 2010. In the post-tabloid, instant-access landscape of the manufactured celebrity figure, there has never been a more rapid rocketing to mega fame than Gaga’s rise about five years ago. She had six No. 1 hits over the course of a single year. She sold 1.1 million copies of “Born This Way” in its first week alone. Beyonce played her backup on “Telephone.” Now, her off-brand engagement to Taylor Kinney (he proposed with a heart-shaped ring on Valentine's day!) is barely news. She’s duetting with Tony Bennett and it’s unclear who is benefitting more from the collaboration. What happened?

“Is it because she’s not good anymore?” HuffPost Entertainment managing editor Christopher Rosen asked in an email. If we’re talking about “good” meaning “fun to dance to while drinking flavored vodka,” then, no, she's not. “Artpop” and that “Cheek To Cheek” cover are not as “good” as her past stuff. Although, really that distinction has always been more about Gaga's persona than her hit singles. She reached a new level of complexity with “Bad Romance” and “The Fame Monster,” but her music was mostly fluff sprinkled with hooks. At its core, her discography has been catchy pop that didn’t even attempt to match the level of complexity purported by her sartorial choices, post-modern approach to the music video and aggressive name dropping of Andy Warhol. Gaga’s appeal was always in the packaging. She emerged as a true performer equipped with her own mythology and symbolism -- the sort of figure that we hadn’t seen since Madonna. That's where the fascination began, and also where it ended.

“Gaga’s presence introduces the formerly unthinkable idea that Madonna, another voracious Italian girl, may really, truly, finally be on her way out,” Vanessa Grigoriadis wrote for New York magazine in 2010. At the time, that made sense. The similarities were clear -- both had the dark penciled brows, platinum hair and an uncanny ability to dance the fine line between art and consumerism. The creatively controversial stylings of both found a careful balance of capitalism and subversion by sheer virtue of being churned out in the form of radio hits. Madonna has stayed relevant by navigating the tenuous space between the two realms, while Gaga quickly pushed herself over the edge by force-feeding us her artistry in light of her pop stardom. And that's why she's already on her way out, while Madonna is still providing "controversy" to the masses.

Look at "Artpop." The message of the album is the idea of Gaga as art. (Like, very literally: “Pop culture was in art, now art's in pop culture in me.”) With "Applause," Gaga's avant gardism has become as hollow as one of Jeff Koons’ balloon animal sculptures. Being avant-garde, truly experimenting in any medium, has always been about breaking from the accepted milieu and refusing to compete. Yet, Gaga purported the avant-garde, while her purest motivation was competition for fame.

For a more recent comparison, we can look to Katy Perry. Back in 2010, that same Grigordias New York magazine piece likened Perry to one of the "rising talents unable to push through to superstardom." In 2014, "Roar" beat out "Applause" as part of Perry's ever-swelling collection of hits. Perry's timeline and approach to stardom make her the ultimate foil for Gaga. Where Gaga steeped herself in meaning and pretension, Perry stands for nothing. Her songs are not anymore about her than they are about the 13-year-old girl in Tulsa who really does feel like a plastic bag. As Rich Juzwiak wrote after her Super Bowl performance, "[It's unclear] Katy Perry has anything to say, any unique perspective, any capacity to challenge or surprise, any persona beyond vaguely goofy and occasionally sentimental."

In looking at all three we see where Madonna and Perry have maintained their fame while Gaga has waned. Perry is a sort of a vessel for the pop-culture machine, where Madonna imbues artistry into the artifice of her persona, but both embrace the manufactured nature of their stardom. We know that these figures are created for us, almost as if in a "Josie And The Pussycats" lab. Gaga didn't fail because she is inauthentic -- all pop stars are -- but because she refused to embrace the reality of her act. As an icon of the millennial pop, Gaga may never truly be "over," but until she can channel the authentic inauthenticity we see in Perry and Madonna, let's hope she has enough room for that meat dress in her freezer.

Lady Gaga Was The Biggest Pop Star In The World. What Happened?
Lady Gaga's artRAVE Tour 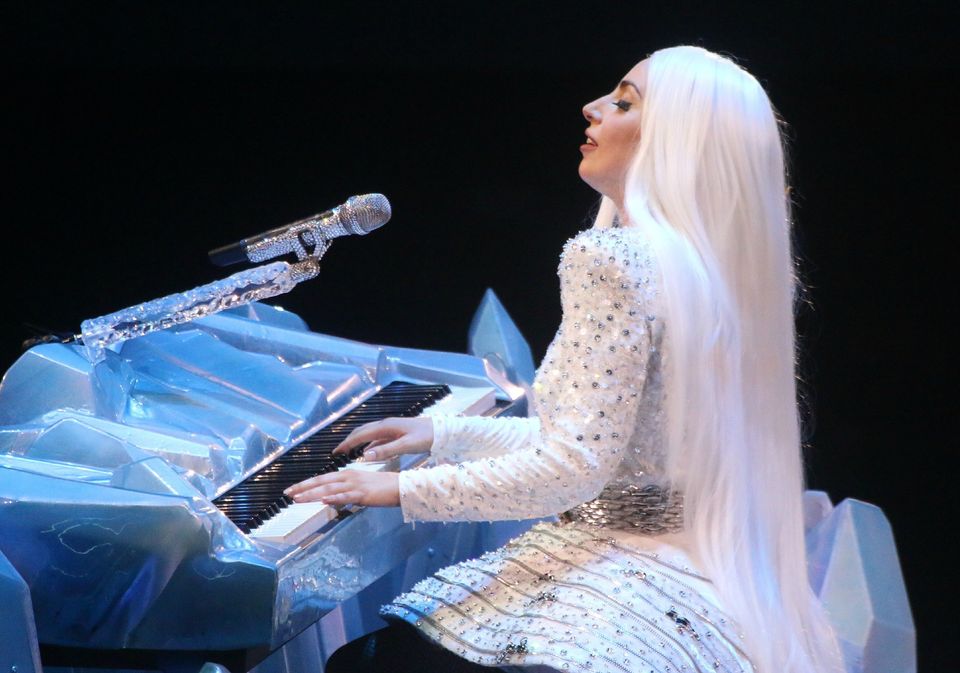