“Photoshop” has become synonymous with unrealistic body image, almost a metonym for the lack of body diversity in magazines and on billboards. Crucial parts of the female anatomy are cropped away using Photoshop, and we point our pitchforks, gasping, “This! This sloppy editing job is the entire problem!”

That doesn’t not make sense. Photoshopping women’s bodies in ads or cover stories or Instagrams is dishonest. It usually involves taking an already insanely attractive celebrity and making her measurements even more unattainable for us mere humans.

That’s obvious, but, like, 1) that’s not Photoshop’s entire purpose. Photoshop is also used to make mountains look more majestic and to create images of Paula Deen riding things. And 2) the more sinister, thigh-gap-shaving use of Photoshop is just a symptom of the disgusting, reductive, body-shaming, diversity-lacking nonsense that defines our culture.

Blaming the whole thing on Photoshop is like saying, “I cannot believe this sore throat keeps on giving me the flu.”

Because of this fallacy (and its aggressive perpetuation via fraught headlines including the world "problem"), we tend to lose sight of the overarching issue that Photoshop is a part of, and how deeply it is ingrained in the images with which we are bombarded.

Consider the way the rejection of Photoshop fits into this discussion. Recently, some famous ladies have refused to be Photoshopped. Emma Roberts did an un-retouched campaign for Aerie, which is just so courageous of her. I mean, can you even imagine bearing your ridiculously good-looking, tiny, white self in pretty underwear for all to see? It’s all so raw. Especially the airbrushed-in kittens.

Kate Winslet also refused to be Photoshopped in a contract with L’Oréal. That’s maybe a bit more admirable, because Kate Winslet is 40, and, well, ageism. Still, these are both really, really gorgeous famous women. And there’s something about someone as stupidly attractive as Emma Roberts not being Photoshopped that only perpetuates the problem. Emma Roberts doesn’t “need” a thigh-gap cut out with an eraser because she already has one.

It's basically the digital version of the Cool Girl. We all want to be pounding Doritos or other synthetic cheeses while also looking like Jennifer Lawrence. No one wants to be digitally enhanced in order to appear acceptable to our patriarchal society, but that's just the way the cookie -- which you probably shouldn't eat, by the way --  seems to crumble. Sorry!

Roberts and Winslet's anti-Photoshop stances are for advertisements, so, let’s also temper any praise with a friendly reminder of capitalism. Either way, this is not to degrade the individual efforts of any women. They’re trying. And what else are they supposed to do? Suddenly sprout bingo arms to be more relatable? No, for the most part, good on you Emma and Kate.

It’s just that when we get so caught up in being like, “Yaaasssss, these beautiful women are letting us see the real them,” it only further obscures the underlying issues. There is still a complete and total lack of body diversity that defines Hollywood and its surrounding publicity machines.

We’re still in a place where we don’t know how to talk about expanding the spectrum without calling only some bodies “real.” Plus-size remains a stigmatized buzzword despite the fact that the average American woman is a size 14. When the closest we’ve gotten to a wide array of women given visibility is a Dove campaign, something is still very, very wrong.

The solution -- and this should be blatantly clear, though it's not -- is rooted in expanding the representation of bodies of all colors, shapes and sizes that appear in everything from cover stories to marketing strategies. Refusing to Photoshop those images would just be a fun bonus. For now, specifically not slimming down the women who already make it into our minuscule threshold of accepted bodies isn’t necessarily a step in the right direction. It’s a distraction.

PHOTO GALLERY
Celebs With No Photoshop
Download
Calling all HuffPost superfans!
Sign up for membership to become a founding member and help shape HuffPost's next chapter
Join HuffPost 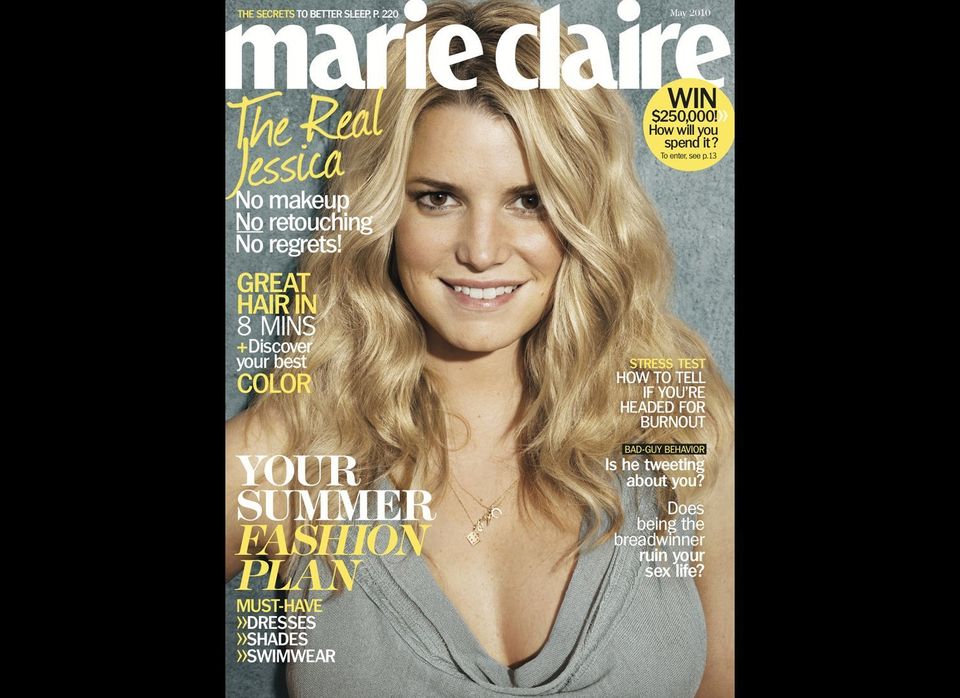