The range among the 86 large cities is considerable. For example, in the United States, income adjusted house prices in the most expensive cities were from double to triple the levels in more affordable markets (such as fast growing Dallas-Fort Worth, Houston, and Atlanta and strong markets such as Columbus and Indianapolis). It is also new. For decades following World War II, the median multiple was 3.0 or less Australia, New Zealand, the United Kingdom and the United States. International housing affordability performance is summarized in the Table.

Why Housing Affordability is Important

Housing costs are the largest element of household budgets, and they vary far more between cities. By comparison, other expenses, such as transportation, clothing and food vary little between cities. Middle-income housing affordability is a principal determinant of the standard of living, because households paying more for housing have less with which to purchase other goods and services.

In addition, where middle-income housing prices are high relative to incomes, lower income housing costs tend to be higher. This is evident in costly California, which according to the US Census Bureau has the highest housing-cost adjusted poverty rate in the nation. This is substantially higher than states with reputations for high poverty rates, at half higher than Mississippi and nearly twice that of West Virginia.

There are still some affordable middle-income markets, but affordability has been lost in others. Some cities have deteriorated to "severely unaffordable," with median multiples over 5.0, well above the 3.0 benchmark.

Why are there such large differences in housing affordability? Put in layman's terms, the problem is land shortages created by planning policies. Cities have drawn urban growth boundaries, beyond which middle-income housing construction is virtually prohibited. Consistent with economic axiom, restrictions on supply lead to higher prices, other things being equal. These "urban containment" policies drive up land prices, which also drives up house prices. House construction costs are little different, for example, between the Atlanta and San Francisco metropolitan areas. But the land in San Francisco drives prices to more than three times that of Atlanta, income adjusted.

Urban containment seeks to stop urban expansion ("urban sprawl"). Yet, as The Economist indicates, sprawl can only be stopped "forcefully. But the consequences of doing that are severe." These include higher house prices and, according to Chief financial writer of The Financial Times Martin Wolf, "...ultimately force people to live in more cramped conditions than would occur without limits on supply."

The nexus between urban containment regulation and higher house prices is confirmed in economic research. Just a few examples include Paul Cheshire, of the London School of Economics (see Urban Containment, Housing Affordability and Price Stability - Irreconcilable Goals), Alain Bertaud, a former principal planner at the World Bank, Arthur Grimes, former Chairman of the Board of the Reserve Bank of New Zealand, Kate Barker, former member of the Monetary Policy Committee of the Bank of England and the late Stephen Mayo of the World Bank.

Most and Least Affordable Cities

In Australia, where urban containment regulation is virtually universal, all five markets had severely unaffordable housing, from 6.0 in Brisbane to 9.8 in Sydney. Even Adelaide (6.4) was severely unaffordable, despite its ranking in the lower performing third of world metropolitan economies by the Brookings Institution.

The US had a near monopoly on housing affordability. Two-thirds of US markets were affordable or moderately unaffordable. All but four of the 27 most affordable cities were in the US, where urban containment policy has spread to a smaller percentage of cities.

Former Governor of the Reserve Bank of New Zealand Donald Brash characterized the urban containment-housing affordability connection in his introduction to the 4th Annual Demographia International Housing Affordability Survey indicating: "...the affordability of housing is overwhelmingly a function of just one thing, the extent to which governments place artificial restrictions on the supply of residential land."

Combining the cities, the US was the most affordable (3.6), followed by Ireland (4.3) and Canada (4.5). The least affordable were Australia (6.4), New Zealand (8.2) and Hong Kong. Similar surveys are described that show a median of 8.6 among 40 major metropolitan areas in China (The Economist) and 3.7 in Korea by Kookmin Bank (Figure). 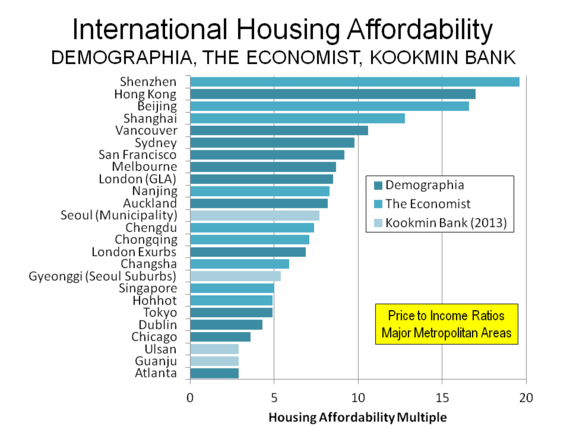 There is increasing international concern about the declining fortunes of middle-income households. At the Brisbane G-20 Summit in November, governments around the world declared "better living standards" to be the highest priority and indicated a commitment to reduce poverty. This requires not only higher incomes, but avoiding policies that unnecessarily raise the cost of living, such as the cost of housing. Middle-Income housing affordability relies on a "plentiful and affordable" supply of land for development on the urban fringe, as urbanist New York University Professor Shlomo Angel indicates in his introduction to this year's Demographia Survey.