GAZA, May 30 (Reuters) - Gaza’s dominant Islamist Hamas movement said on Wednesday that Palestinian armed groups in Gaza have agreed to a ceasefire as long as Israel also ceases fire, after the most intense flare-up of fighting since a 2014 war.

Following dozens of rocket and mortar launches at Israel throughout Tuesday and overnight, and Israeli tank and air strikes in Gaza, there were no reports of violence more than two hours after the announcement of a truce by Hamas.

Israeli Intelligence Minister Israel Katz sidestepped questions on Wednesday on whether Israel had agreed to a ceasefire but said it was not interested in an escalation towards war.

“It all depends on Hamas. If it continues (to attack), I don’t know what its fate will be,” Katz said on Israel Radio.

Authorities in southern Israel, where rocket warning sirens have sounded frequently since the Palestinian barrages began on Tuesday morning, said schools would open as usual.

The armed wings of Hamas and Islamic Jihad claimed responsibility for the firing, saying it was in response to Israel’s killing of dozens of Palestinians since March 30, most of them in Gaza border protests.

Israel has long said it would not tolerate such attacks from Gaza.

“After the resistance succeeded in confronting the (Israeli) aggression ... there was a lot of mediation in the past hours,” Hamas’ deputy chief in Gaza, Khalil al-Hayya, said, in apparent reference to Egyptian efforts to end the fighting.

“An agreement was reached to return to the (2014) ceasefire understandings in the Gaza Strip. The resistance factions will abide by it as long as the Occupation does the same,” he said in a statement, using militant groups’ term for Israel.

By late on Tuesday, Israeli aircraft had hit 55 facilities belonging to militant groups in Gaza, including a cross-border tunnel under construction, in response to the Palestinian barrages, the military said.

Such potential targets are usually abandoned by militants when violence with Israel flares, and there were no reports of Palestinian casualties.

Israel said some 70 rockets and mortar bombs were fired from Gaza and three of its soldiers were wounded by shrapnel.

Several of the projectiles were shot down by Israel’s Iron Dome rocket interceptor system, others landed in empty lots and farmland. One exploded in a kindergarten yard, damaging walls and scattering debris and shrapnel around the playground, about an hour before it was scheduled to open for the day.

Violence had soared along the Gaza frontier in recent weeks, during which 116 Palestinians were killed by Israeli fire at mass demonstrations calling for Palestinians’ right to return to ancestral lands now in Israel.

Amid international condemnation of its use of lethal force at the mass demonstrations that began on March 30, Israel said many of the dead were militants and that the army was repelling attacks on the border fence.

Palestinians and their supporters said most of the protesters were unarmed civilians and Israel was using excessive force against them.

A Hamas spokesman had defended Tuesday’s attacks as a “natural response to Israeli crimes.” An Islamic Jihad spokesman said “the blood of our people is not cheap.”

More than two million Palestinians are packed into the Gaza Strip, a narrow coastal enclave. Israel withdrew its troops and settlers in 2005 but, citing security concerns, maintains tight control of Gaza’s land and sea borders, which has reduced its economy to a state of collapse.

Egypt also restricts movement in and out of Gaza on its border. 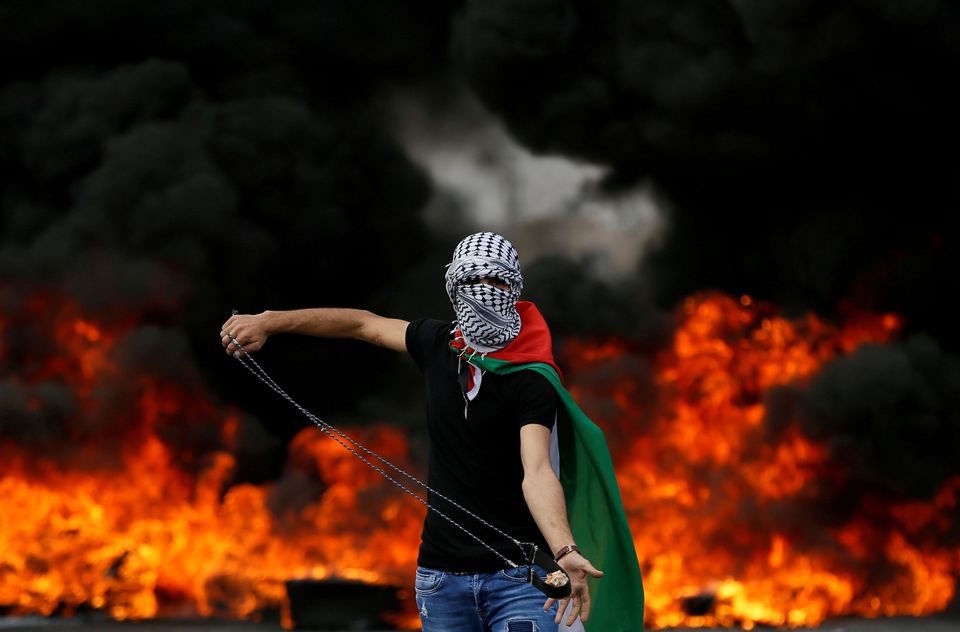 1 / 14
A Palestinian demonstrator holds a sling during a protest marking the 70th anniversary of Nakba, near the Jewish settlement of Beit El, near Ramallah, in the occupied West Bank May 15, 2018.&nbsp;
Mohamad Torokman / Reuters