In a season of political discontent -- trivialities and distractions, renewed culture wars and the rebirth of regressive impulses -- these books remind us what is really at stake in political participation and democratic tension. It's easy to get depressed, or lose sight of social justice goals, in the midst of electoral theater, and convenient to look away from the real causes of income inequality or human rights violations. We're engaged in a losing counterinsurgency war in Afghanistan, and an escalating one in Pakistan, continuations of the Long War; we've never really paused to understand why the law was so cavalierly abused in the last ten years--let alone hold the offenders accountable; we've tried to move past the financial collapse with at best superficial remedies, without addressing the motivating economic causes; and we still root for the American Dream (the one that John Boehner has finally, tearfully chased down) without inquiring into the quality of life the dream actually embodies. We can improve our quality of life, we can take inspiration from active citizens inside our borders and from nations dedicated to social welfare; we can even look back at shining moments in our own history to retrieve democratic virtues. These were some of the best books of the year that made just such a case for social uplift, based on reason, analysis, and judgment.

Elections Got You Down? The 17 Best Social and Political Awareness Books of 2010 (PHOTOS)
POlitcal Books 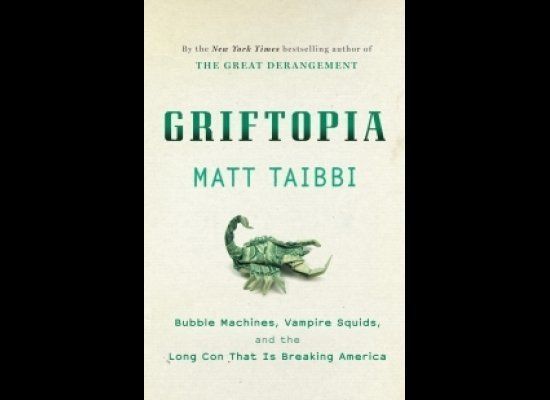 1 / 17
Matt Taibbi, 'Griftopia: Bubble Machines, Vampire Squids, and the Long Con That Is Breaking America' (Spiegel & Grau)
What Taibbi did as an exclamation point for the Bush years in his incomparable <em><a href="http://www.amazon.com/Great-Derangement-Terrifying-Politics-Religion/dp/038552062X/ref=sr_1_1?ie=UTF8&s=books&qid=1288983672&sr=8-1" target="_hplink">The Great Derangement: A Terrifying True Story of War, Politics, and Religion at the Twilight of the American Empire</a></em> (2008), he has done now for the new administration. Hands-down, this is the sharpest, funniest, most agitating political book of the year! Taibbi excels at the vicious barb, holding Wall Street manipulators and their political allies in utter contempt. On Alan Greenspan's social climbing: "Greenspan met [Ayn] Rand in the early fifties after leaving Columbia, attending meetings at Rand's apartment with a circle of like-minded intellectual jerk-offs who called themselves by the ridiculous name the 'Collective' and who provided Greenspan the desired forum for social ascent." On Sarah Palin's politics of resentment: "Being in the building with Palin that night [the 2008 Republican convention] is a transformative and oddly unsettling experience. It's a little like having live cave-level access for the ripping-the-heart-out-with-the-bare-hands scene in<em> Indiana Jones and the Temple of Doom</em>. A scary-as-hell situation: thousands of pudgy Midwestern conservatives worshipping at the Altar of the Economic Producer, led by a charismatic arch-princess letting lose a grade-A war cry." The grifter class is ripping America of a superpower's worth of accumulated wealth--now that we don't produce much anymore--and Taibbi is on the job to tell us the real story of the mortgage scam, how municipalities are selling off public assets for a pittance, how the bankers got rich even as they brought down the financial system, and how the oil price hike of 2008 was a speculative bubble fueled by Goldman Sachs. You get the feeling that the media watchdogs are still asleep at the wheel.