President Obama gets increasingly negative marks for foreign policy, while voter preferences for the U.S. House remain closely divided. A new Republican polling/data firm emerges. And the debate over what went wrong with polling in Virginia's 7th District continues. This is HuffPollster for Wednesday, June 18, 2014.

BROAD SUPPORT FOR EPA RULES, EVEN WITH OBAMA'S NAME ATTACHED - We reported earlier this month on a Post/ABC poll that found wide support for federal limits on greenhouse gas emissions, but cautioned that the survey didn't explicitly attach President Obama's name to the proposal. A new NBC/WSJ survey, however, opens its question with "President Obama has directed the Environmental Protection Agency…" and find. similar results. Ashley Alman: "Two-thirds of Americans back President Barack Obama's push to reduce carbon emissions from power plants. An NBC poll released Wednesday shows that 67 percent of Americans support Environmental Protection Agency rules released this month that will cut carbon emissions from power plants 30 percent by 2030. Thirty-seven percent expressed strong support….Of those surveyed, 53 percent agree that action to reduce coal emissions in necessary, because it will lead to cleaner air and reduced health care costs, while confronting global warming and natural disasters." [HuffPost, via Wall Street Journal]

Obama's foreign policy rating dips - HuffPollster: "President Barack Obama's foreign policy approval rating is down a net 5 points in two months, according to an NBC/Wall Street Journal poll released Wednesday, with a record 57 percent of Americans now disapproving of his performance. The survey predates both growing sectarian strife in Iraq and the capture of a suspect associated with the 2012 attack on a U.S. diplomatic mission in Benghazi….While foreign policy once ranked among Obama's strongest issues, polls show disapproval of his performance gradually climbing to a new high. HuffPost Pollster's average, which combines all publicly available polling, finds disapproval of his policies up about 3 points since the beginning of the year, and nearly 11 points since the start of 2013." [HuffPost, via NBC]

But Obama's falling ratings don't translate into change on House ballot - HuffPost's Rachel Lienesch: "The results of the NBC/Wall Street Journal poll out today indicate that Obama’s low approval ratings alone may not necessarily push Republicans to victory this November. The new poll, like many other national surveys, finds that Obama’s approval rating remains low. Overall, 53 percent of adults disapprove of Obama's job performance, compared to just 41 percent who approve. However, the poll also finds that the high disapproval rating does not translate into a similarly high vote for the Republican Party. By a 45 percent to 43 percent margin, respondents said they would prefer the outcome of this November’s elections to be a Congress controlled by Democrats. Those numbers are virtually unchanged from two months ago when respondents were evenly split – 45 percent preferred a Republican-controlled Congress and 45 percent opted for a Democrat-controlled Congress."

One reason: the GOP isn't popular either - Harry Enten: "Republicans have a good chance to take the Senate and are very likely to keep control of the House, but they’re not running away with the 2014 midterm elections. Democrats remain even among likely voters on the generic congressional ballot, a key measure of the national political environment. How is that possible? Well, Republicans control the House of Representatives, and Congress is super unpopular. On Monday, Gallup reported that Congress’s approval rating is just 16 percent. That matches other polling data, and if that level of support holds through November, it would be the lowest heading into any midterm on record. What we’re left with is two unpopular entities — Obama and Congress — somewhat offsetting each other, leading to a national environment (as measured by the generic congressional ballot) in which neither party has that great of an edge....[T]he effect of Congress’s approval rating seems very real. Republicans look like they could be hurt by that low approval rating." [538]

Other surveys found Ernst lead - A trio of polls taken since Ernst's primary victory on June 3, from Rasmussen, Loras College, and Vox Populi (R), found Ernst ahead by margins of 1 to 6 points. [HuffPollster chart] 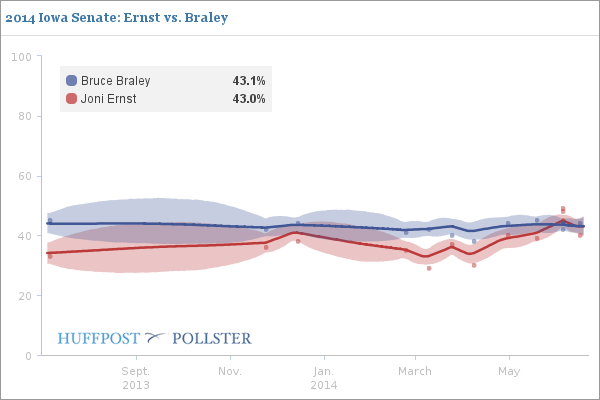 ANOTHER EXPLANATION OF WHY AN INTERNAL POLL MISSED ERIC CANTOR'S LOSS - Mark Mellman: "I'm going to defend the indefensible and attempt to explain the inexplicable. I’m unwilling to throw up my hands and blame statistics or incompetence for the failure of polls to foresee Rep. Eric Cantor’s primary defeat...Let’s entertain a possibility that seems improbable, but one I would argue is more likely than any of those so far considered: The poll was more or less correct. Perhaps it was off by 4 or 8 points, but not 18. Thirteen and 14 days before the election, when Cantor’s poll was taken, the majority leader had something like 62 percent of the vote. Six days later, when another poll was taken by Vox Populi, Cantor’s support had shrunk by 10 points, to 52 percent. And then, in the eight days between that poll and the time the votes were counted, Cantor slipped more, to his final 44.5. How plausible is this alternative based on what we know about primaries? Fairly. Without the anchor of party identification, primary horse races can shift much further and faster than those in general elections...If there is a clear lesson here, it is not to avoid a particular pollster, but rather to never assume a lead will hold, especially in primaries. If you want to be accurate, keep polling." [The Hill]

-Vox Pop Polling's Brent Seaborn writes up his explanation of how his firm's VA-07 poll matched up against reality. [Roll Call]

-Mellman isn't buying it, says "no post elec poll will be accurate" in this situation. [@MarkMellman]

-Andrew Gelman renews his explanation for why primary election outcomes like VA-07 can be harder to predict than general elections. [WashPost]

Did you vote in the VA-7 primary? We want to hear from you -- drop us a note at pollster@huffingtonpost.com.

NEW GOP POLLING/DATA FIRM - McKay Coppins: "With Eric Cantor’s surprise primary defeat still fresh in Republicans’ minds, a new opinion research firm is launching this week that aims to fix the GOP’s increasingly dire polling problem, bring the party up to speed in the election data wars, and upend the way political campaigns are run. In an interview with BuzzFeed, Echelon Insights’ co-founders, veteran GOP digital strategist Patrick Ruffini and pollster Kristen Soltis Anderson, said the new firm will merge the campaign crafts of telephone surveys, focus groups, and data analytics to help Republican clients rethink the way they deploy resources and shape their messages. 'The idea is to have data and information as the nerve center and the hub of how decisions are being made on campaigns, instead of just relying on the highest-paid person’s opinion,' said Ruffini. Traditionally, he said, campaigns are made up of competing factions, with pollsters in one corner, digital staffers in another, and a Stuart Stevens-like guru at the head of the organization, making decisions after he hears out his staffers’ arguments. Echelon will seek to overturn that model by combining those efforts into one comprehensive intel-gathering operation." Note: Soltis Anderson was a HuffPost Pollster contributor from 2010 until 2013. [Buzzfeed]

-A TargetPoint (R) poll for the Human Rights Campaign finds little support for a "revolution" -- or even much protest -- among gay marriage opponents. [Politico]

-Jim Hobart (R) says millennials are optimistic about their long term economic future, but worried about some aspects of the short term. [POS]

-The Economist provides a one-minute explainer of the GOP's demographic problems. [WashPost]