Who could forget her words at the Democratic National Convention in 1992? Keynoter Ann Richards, referring to then Vice President Bush: "Poor George, he can't help it. He was born with a silver foot in his mouth."

Maybe the Bush family had the last laugh two years later. Let's go to Texas in November 1994. Unemployment across the state hit its lowest level in four years. Test scores are up and serious crime is down. Wouldn't you love to be a charismatic, gubernatorial incumbent with those kind of campaign bragging points? Yet, poor Ann Richards. She could not help herself with those winning numbers against Karl Rove on Team George W. Bush. She lost her reelection bid.

I see hints of Richards' failing campaign in Team Obama and the pathetic Democratic congressional candidates distancing themselves from the president as if he had the same "cooties" that George Bush had in 2008. You would think the president created Ebola and the economy remained at levels comparable to the dizzying lows of the final months of GW's White House.

Bush-Obama counties will be pivotal to outcomes in states with the closest and most combative senate races -- especially Colorado, North Carolina, New Hampshire, and Georgia. In talking to voters and reporters in swing counties, a broader perspective emerges on the role of the president in the midterms. Take John Cordsen. He is not a fan of the president and he voted for George W. Bush in 2000 and 2004. He also chose to pull the lever for forgettable independents in 2008 and 2012, since he also could not stomach voting for McCain and Romney. However, he does not think the president's popularity in Larimer, and elsewhere, is compatible with portrayals in the media.

"I think its oversimplification by the national media, basically making it too simple for the voters," says Cordsen, editor of the Estes Park Trail Gazette in Larimer. "It creates a scapegoat mentality. And I think that's what I'm hearing most from the people that I talked to. They say they're just sick of the whole process. It is not the president so much. It is bigger than the president and relates to both parties." 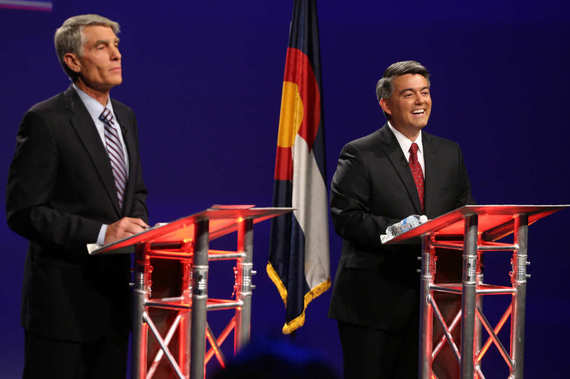 In the hotly-contested Colorado senate race, Republican Cory Gardner has employed the GOP strategy, seeking to connect Democrat Mark Udall to the unpopular president. "I don't think it is making a difference in views from what I've seen across at least this district," says Cordsen.

In fact, Cordsen, who leans Republican, likes both candidates and is still undecided. He may, in fact, vote for Udall. "He has been a good friend to the Estes Park area over the years and very supportive of Rocky Mountain National Park. He helped the reopening following the sequester. Things like that matter more than his connection to the president. I also like Cory Gardner. I probably won't decide on this one until I have a pen in my hand or pencil in my hand at the ballot."

Cordsen has lived in Larimer for 13 years and witnessed the county's changing political colors. It was solidly red in his early years. The county has dramatically grown from 251,404 in 2000 to 310,487 in 2012. The growth has ushered in more blue, creating a bit of contentious mix.

Contentious is an understatement when it comes to the senate race in North Carolina, the most expensive senate race in history. Many see the race in terms of, who do you hate more -- Obama or state Republicans? However, some voters say there is a silent majority in the middle that is frustrated with both sides in the ferocious Hagan-Tillis battle.

"We would not allow our kids to act like the politicians are acting right now in Washington and on the campaign trail," says Duane Davis, senior investment advisor and resident of Forsyth, a Bush-Obama county in North Carolina. "In Washington, it is like, 'I am not going to listen to you or compromise at all. I am going to make you fail, even if it brings the country down.' Most of us are not on the extreme side but we get pulled by both extremes."

Davis would not reveal who he voted for in the senate. Some say politics has become so heated that it is not wise to be too open about choices in some parts of the state, especially if you want to keep friends. "It seems to me that the change really started happening in 2000." says Hal Goodtree, who edits the CaryCitizen, a newspaper in Wake, another Bush-Obama county. "People become more partisan in politics, more partisan and more divided... It got out of control when people would lose friends over politics. Now a lot people don't talk about it."

The Obama liability factor is real for many white voters in North Carolina, according to John X. Miller, editor of The Winston-Salem Journal, a paper covering Forsyth County. "A lot of that has to do with what I would consider a timely dawn of issues that were not there in 2012 that are here now in 2014. Even though, for instance, the economy has been successful in recovering in a lot of places, there's still issues of jobs here in North Carolina, not as much as there were in 2012, but still, issue of jobs. But then you have the Affordable Care Act and, here in North Carolina, we have essentially one major insurance company and rates are going up with that insurance company and the rhetoric that comes from them is it's because of the Affordable Care Act. I do think that there are issues whether it be with ISIS, or foreign policy, the economy, health care, jobs. I think all of those issues are accumulating in the negative for a lot of non-minority voters."

On the other hand, Miller expects black voters to go to the polls in record numbers in support of Democrat Kay Hagan, not because of a love affair with Democrats or Hagan, but a fear of Republican Thom Tillis. "I think they recognize, because of what's happened in our state legislature with a GOP legislature and a GOP Governor for the first time in 100 years, that all politics is local and that they need to get out and vote. So, I think the conversation, here in North Carolina, is to hold onto the gains. Many fear what a GOP senator from North Carolina named Thom Tillis could mean. That is the real reason people see the need to get out and vote. It is not about saving the Democratic party."