City planners voted unanimously Wednesday night to deny a controversial proposal that would allow WalMart to build loading docks on busy Miami Avenue in Midtown, rather than a side street as currently required.

While building cargo bays on North Miami Ave. is by no means a non-issue for neighbors, most of the overflow crowd of 200 residents packed City Hall to argue for or against WalMart in particular -- and many to decry the fact that the City of Miami had requested the zoning amendment rather than WalMart or its developers, who have yet to even file a proposal.

Though residents, developers, and property owners stood up one by one to make arguments to both ends, the Planning and Zoning Appeals Board seemed most swayed by the latter concern.

“Clearly there’s a little bit more going on than just the text amendment,” said board member Patrick Goggins. “When things happen in the open you get the best result.”

"I think that the planning and zoning board did a marvelous job of getting to the bottom of the facts," said Grant Stern, a local businessman and vocal WalMart opponent. "They narrowed the issue down to its heart, which is that WalMart tried to game the process -- and that the idea was bad."

The proposed WalMart would be the first inside the Miami city limits, and one of the massive retailer's only stores in a major urban core. Many residents of Midtown have recoiled at the idea of the world's largest retailer barging into the pedestrian-friendly, restaurant-peppered neighborhood. One of Miami city planning's brightest success stories, Midtown is sandwiched between the burgeoning art-and-design neighborhoods of Wynwood and the Design District.

"I moved from the suburbs to Midtown 5 years ago, and would hate to see it turned into another strip mall," said a resident of the Midtown 2 tower. The neighborhood liquor store owner who lives in Midtown 4 argued that her business and other "mom and pop" shops would be run into the ground by WalMart.

One resident said that, as a city planning writer himself, he was alarmed the city would change code through a text amendment without a site plan: "What makes great cities? It's not mixed use. It's great design, followed by steadfast adherence to the rules."

Other neighbors argued that WalMart would bring much-needed jobs and relief from high prices.

"I can't afford to buy the art in the art galleries, or eat at the local restaurants," a Wynwood resident argued. "I can afford to shop at ‪WalMart‬."

An Allapattah man countered that argument with an impassioned speech pointing out that many of the unemployed in the room used to work in the Wynwood Garment District -- before WalMart "shipped their jobs to Costa Rica." Another announced WalMart "destroys" 2.8 jobs for every job it provides.

WalMart told the Miami Herald it still plans to build on the Midtown site, which lies between North Miami Avenue, Midtown Boulevard, Northwest 29th and 31st Streets. Representatives even told the Herald's editorial board the store "fully intends on becoming an 'arts incubator'" -- which, presumably, would be another first for a WalMart store.

The Miami city commission, which is not required to follow the recommendation of the planning and zoning board, will cast the final vote on the amendment Thursday after yet more public comments.

Stern said the most important thing people can do to stop the WalMart is show up again on Thursday, as if the city approves the amendment there will be no further opportunity for public comment on WalMart.

"We're pleased with the move," he said, "but we need the full support of the full City of Miami Commission."

Residents cheer the unanimous vote against changing the code: 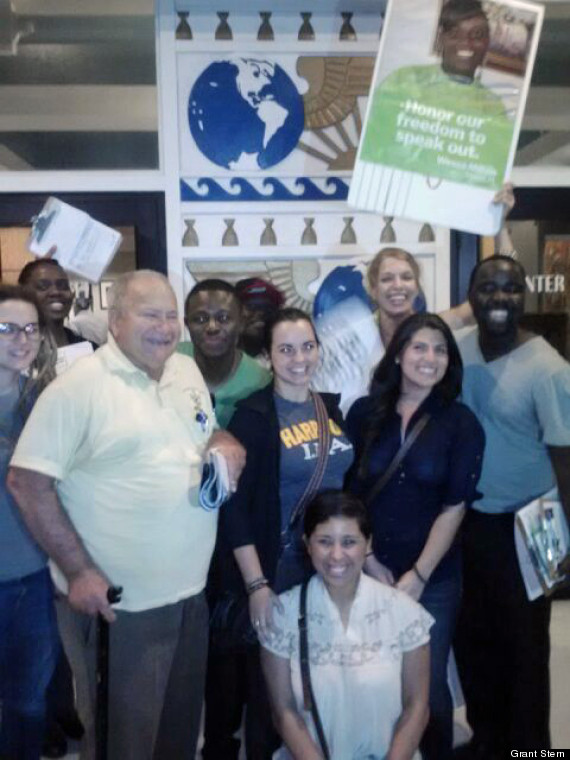