Richard Curtis had a death in the family. I'd flown in to London to do the interviews for my Pirate Radio coverage, and the director was at the top of my list. Some things, though, take precedence over spending fifteen minutes with a dumpy New York journalist, and for Curtis, this had to be one of 'em. I had no argument there. I did my sessions with actors Tom Sturridge, Talulah Riley, and Nick Frost instead (you can hear them in Part 1 of this series) and silently wished Curtis well.

Three weeks later, he and I finally had our sit-down. Frankly, I'm not sure I could've 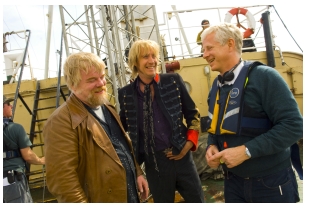 scraped it all together in so short a time under such conditions, but I was grateful he did. That conversation wraps up this installment, along with my exclusive one-on-one with Bill Nighy -- who plays the paternal, impeccably dressed, and seemingly gay (he's one of the few characters who doesn't get it on in the course of the film) proprietor of the pirate broadcaster Radio Rock -- and the roundtable interview with "The Count" himself, Philip Seymour Hoffman. You'll learn a little about Nighy's inner wild man, Hoffman's experiences as the sole American in a cast of Brits, and Curtis' decision to trim Pirate Radio (nee The Boat that Rocked) by some fifteen minutes (or more -- reports vary) for its U.S. debut.

Click on the player below to hear the show.