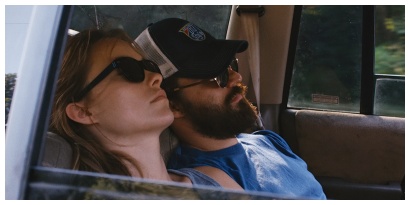 Director Joe Swanberg is back, once again using a semi-improvised approach to capture the chaos in the way we silly humans interrelate, socially, sexually, and otherwise. In Drinking Buddies, Kate (Olivia Wilde) and Luke (Jake Johnson) are co-workers at a craft brewery whose friendship may be turning into something more. The problem with that: both are already in relationships -- with Ron Livingston and Anna Kendrick respectively -- and life is managing to throw them curves that may well lead to the "unfortunate discovery" phase of a relationship well before either have decided whether they're actually in love.

As with such previous films as Hannah Takes the Stairs and Alexander the Last, Swanberg's story-telling style is pleasantly relaxed and ragged, although here he's working with a more high-profile cast (albeit with such walk-ons as director Ti West). We got a few minutes with Swanberg to talk about his approach, and also to explore the life-or-death, take-no-prisoners (joke) world of craft brewing.